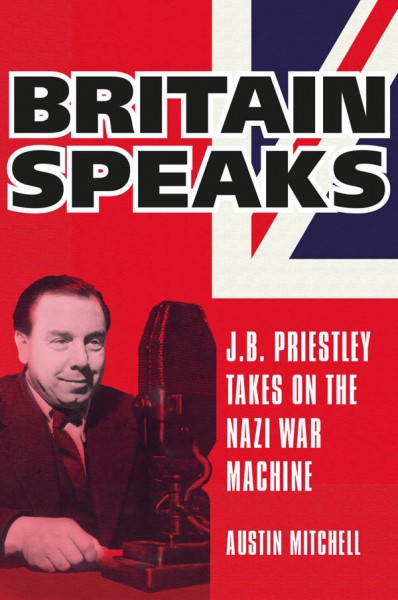 How J.B. Priestley told the world week by week of Britain’s wartime struggle to survive.
From April 1940 he attempted to rally the world, and particularly the United States, to Britain’s cause.
Published here for the first time, these overseas broadcasts Britain Speaks provide a fascinating record of the People’s War.

Beautifully produced in hardback
Available with a dedicated bookplate, signed by Austin Mitchell

(example of bookplate)
(Enter the name(s) and dedication(s) in the notes box below ‘Dedications/Gift Messages’ section, at the checkout)

Britain’s finest hour was also its most desperate. In 1940 Hitler’s armies occupied most of Europe, our shattered army struggled home from Dunkirk and the nation faced the threats of invasion and the bombing Blitz.

Rallying to the crisis, Priestley told the free world in his war-time broadcasts of the British people’s struggle to survive in this first People’s War, as the nation rose to the challenge of defending democracy.

He developed a new vision of a better post-war world – the New Jerusalem –  which was to be the reward for their sacrifices. From April 1940 he attempted to rally the world, and particularly the United States, to Britain’s cause, ending the broadcasts only in 1943, the beginning of the end, when the job was largely done.

Published here for the first time, these overseas broadcasts Britain Speaks provide a fascinating record of the People’s War, the spirit of a beleaguered nation and the building of national morale, all chronicled by a master broadcaster. Priestley spoke. The world listened. The People won.

JOHN BOYNTON PRIESTLEY (1894–1984) was among Britain’s greatest dramatists (An Inspector Calls) and novelist (The Good Companions). These broadcasts consolidate his claim to have also been one of her greatest broadcasters as the hour produced the man, and words became weapons of war.

AUSTIN MITCHELL was Labour MP for Grimsby from 1977 until 2015 and is a former member of the public accounts committee. Born in Bradford, Mitchell was educated at Woodbottom Council School, Bingley Grammar School, the University of Manchester and Nuffield College, Oxford. From 1959 to 1963 he lectured in history at the University of Otago in Dunedin, New Zealand. He was a journalist at Yorkshire Television from 1969 to 1977, presenting their regional news programme Calendar. He has also worked for the BBC.

He is the author of several books, most recently Confessions of a Political Maverick, published in 2018.