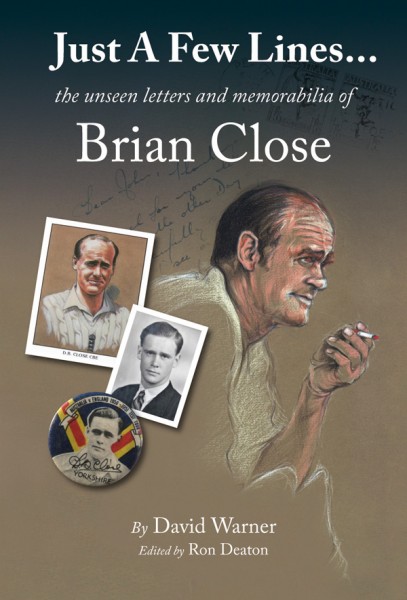 the unseen letters and memorabilia of Brian Close

Brian Close’s feats on the cricket field were legendary.
This previously unseen section of archive material reveals the young man who went on to become that legend.

Brian Close is a true sporting icon: schoolboy cricket and football prodigy, youngest ever England selection, played for England in 22 Tests over four successive decades, best win ratio of any England captain ever, unfairly sacked by Yorkshire (about which the protests of Yorkshire supporters are heard even now), loved a flutter on the horses, hair-raising driver and, through it all, the most likeable and popular of men.

It was not until after Brian Close’s death in September 2015 that either David Warner or Ron Deaton – or anyone else for that matter – had even the remotest idea that the subject matter for this book ever existed.

Only when the scores of letters which Brian wrote in the early stages of his career to lifelong friend, John Anderson, surfaced did it become apparent that they were of major historical significance in highlighting in great detail the day-to-day events of one of cricket’s best known personalities.

To many, they will also be of geographical interest as the letters and their envelopes show exactly which hotels he stayed in while playing first-class cricket in this country and in Australia and Pakistan.

The details contained in them are a graphic reminder of just how gifted a sportsman Brian was, not only on a cricket field but when participating in a multitude of other sports including soccer (on the books of Leeds United, Arsenal and Bradford City), golf, boxing, swimming and shooting to name but a few.

It is over 70 years since the first letters to John Anderson were penned and it is extraordinary that they and all of the rest have survived the passage of time. A remarkable set of circumstances led to them being seen by Warner and Deaton and their astonishment upon sifting through them was all the greater because there had never even been the slightest suggestion that letter writing formed any part of Brian’s make-up.

The letters, the autograph books which he filled on John’s behalf, and the other memorabilia contained within these pages are part of a much wider collection which is now in the hands of the Yorkshire Cricket Foundation. The material selected for this book will surprise and enthral readers..