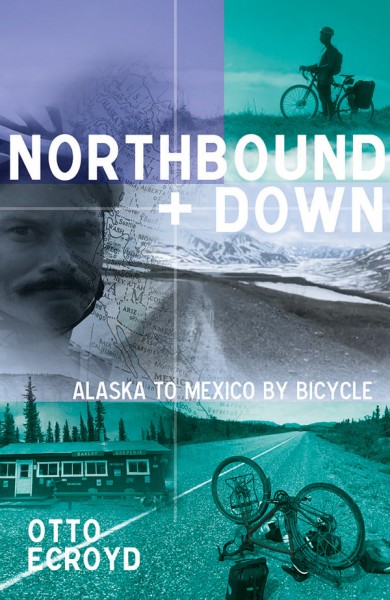 Northbound and Down
Alaska to Mexico by bicycle

The everyman’s take on breaking out of the everyday, cycling 5,000 miles through North America. Achievable adventure for the great unwashed.

“If you think you aren’t ready for adventure, read this. Otto was wildly underprepared for Alaska. Who can’t change a tyre? His journey is a great example of what you can achieve by just taking the first step.” Alastair Humphreys

When Otto Ecroyd embarked on a voyage to sail a broken boat from Norway to France – and failed – he decided to do what any other hapless adventurer would do: cycle from Alaska to Mexico. But, as Otto says, he ‘had never ridden further than across town.’

So, with no experience, the wrong type of bike and with panniers overflowing with lentils, Otto pedals across vast American landscapes, cowers from juggernaut RVs, and all the while wonders when he will next meet a grizzly bear.

En route, Otto’s wit and self-deprecating charm ensure he wins many friends, from an array of regional characters, to a cosmopolitan mix of fellow long-distance cyclists, each with their own motivation for riding the hard miles. With some, he cycles leisurely in tandem; with others, in lung-busting sprints; and with others still, in bedraggled pelotons.
But then, this is no grand départ from the daily grind to the upper echelons of sport, for Otto is not in it for the competition – just the adventure of a lifetime.

Northbound and Down isn’t Ranulph Fiennes crossing Antarctica, or ‘The Man Who Cycled the World’. It’s more entertaining than that. Three months in North America, 100km a day on a bike. The places, the people, the misadventures of the journey. Like a Bill Bryson book if Bill stayed out of the pub once in a while. The local wildlife in the northern frontier. The moose, the bears, the refugees from ‘The Lower 48’ states. The characters in cowboy country. People who defy any stereotype of heartland America, and those who definitely don’t. Down the Pacific Coast, redwood forests, hippie surf towns, mansions and homeless camps. Californian plastic perfection and the weirdness of the American dream.

The preparation for cycling 5,000 miles was questionable at best. The furthest Otto had ridden before landing in Anchorage was from London to Brighton. He rode through a golf course and along a motorway, did laps of Gatwick airport and rolled into Brighton two hours late, ready for bed. He learned how to fix a puncture from YouTube and discovered that not all Porsche drivers are dickheads. Otto’s touring skills start from a low base. The steep learning curve and daily struggles with reality on the road bring humour to the book. The challenge and the shared experience with people along the way leads to a lasting sense of the rewards of adventure.

Otto’s motivations for embarking on this adventure were relatable ones. He was bored at work, too old to get wasted in every hostel in Latin America and too poor for a proper mid-life crisis. This is the story of a normal guy breaking out of the daily grind. Cheryl Strayed’s ‘Wild’, but inspired by a struggle against a life on auto-pilot rather than a life collapsing. A whole middle class, middle career and middle fulfilled generation is in a similar position. They are searching for inspiration. Northbound and Down gives them a taste of this, without having to miss a mortgage payment. Northbound and Down is the everyman’s take on breaking the everyday.

AUTHOR
Otto is a serial adventure starter and first time finisher. He has almost sailed from Norway to Scotland, driven halfway from London to Ulaanbaatar, and gotten lost, stuck and confused (in no particular order) in more countries than he’d care to remember.

Otto moved from New Zealand to London in 2010, a card carrying member of the corporate class. The small joys of City life accumulated. Red-eye flights to Frankfurt, debates over the correct shade of blue on a chart, conference call chat about the weather. Feet began to itch. Maps were bought. Outcomes of previous adventures were disregarded. Northbound and Down is Otto’s first book.