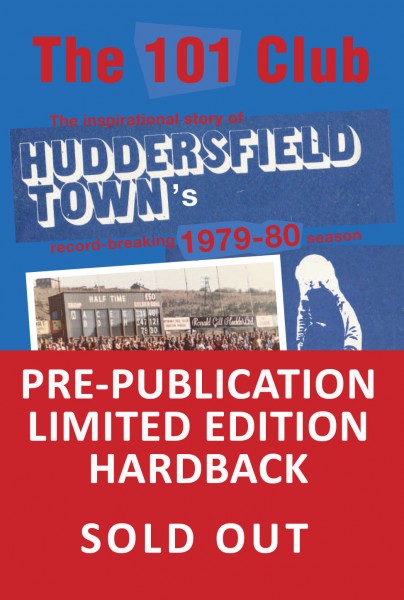 A unique insight into the re-birth of a once-mighty football club as told by every member of the 16-man squad and their manager who left a remarkable legacy.

Includes bookplate, signed by the manager Mick Buxton, members of the team and the author.

From hilarious to heart-breaking, The 101 Club tells the tale of an epic journey from the club’s darkest nights to one of its greatest occasions and beyond. Almost 40 years on, the legacy of these local heroes lives on – had it not been for their exhilarating exploits, Town’s Premier League dreams would be unfulfilled.

Scoring a club-record 101 goals, the Fourth Division title was dramatically clinched in the final moments of the 1979-80 season with a never-to-be-forgotten win over Hartlepool in front of a jam-packed Cowshed.

The 101 Club is a warts-and-all story of how Buxton changed the entire culture of a place that was more holiday camp than football club and includes:

• interviews with the manager and all 16 players

• The view from behind-the-scenes

Not only does The 101 Club re-live the highs and lows of football through the eyes of Buxton and his players, it also provides a rare insight into the lives of lower-league footballers and loved ones before Sky Sports money revolutionised the sport.

Rob Stewart was brought up on Huddersfield’s notorious Walpole Road council estate before heading off to York University. After spells on the Holmfirth Express and Hull Daily Mail, he went it alone as a freelance journalist and spent a decade as a football reporter for The Daily Telegraph. He now covers football for national newspapers and is a regular contributor to Four Four Two magazine and Town matchday programme GUAH. He lives with his partner and three children in exile in Bristol.