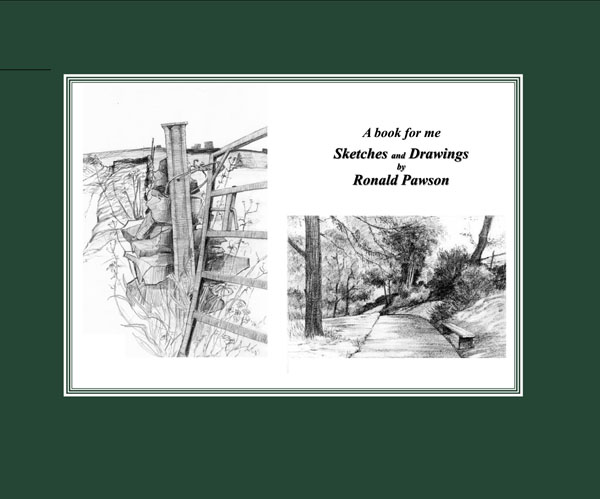 A book for me: Sketches and Drawings

When renown Yorkshire artist Ronald Pawson died in 1977 he left behind a creative legacy that has only grown stronger in the passing years and his paintings feature in collections throughout the world.

This beautifully produced book in hard cover with slipcase is a fine collection of drawings and sketches that show true quality of draughtsmanship, detail, atmosphere and a delightful sense of character.

Born in Armley, Leeds in 1916, Ron’s drawing ability showed itself early, he won an art scholarship at school but was unable to take it up. He found an outlet for his artistic impulses in music. He had a burning desire to be a professional musician. For a time he played the saxophone and clarinet in Johnny Addelstone s dance band. When World War II came, he joined the Army and formed his own band. It was a considerable misfortune that he lost his hearing after an operation and so had to abandon a musical career, and turn back to painting and sketching.
Ron met his wife, Jean Booth, in the art class at Swarthmore Educational Centre. She says, ‘He was the one with this natural creative ability, I was the one who never knew what to do (I talked too much).’ Two years later they were married in 1957.

Ron became professional in the early sixties. He exhibited widely in Yorkshire at all the main galleries and exhibitions. He taught students at evening classes under the West Riding County Council, but had to abandon his teaching after a couple of heart attacks. He started his own private classes, The Pawson Art Group. They proved to be a source of stimulus and satisfaction, not only to its members but to the artist himself.

He was a good teacher, he based his teaching on the importance of sound drawing and he encouraged his students to make a strong systematic approach to each subject. The need for positive line and tone in the place of tentative sketches was always emphasized, this clearly shows in his own landscape drawings.

His humour and humanity came out in his wonderful drawings and sketches looking back to his own school days. The Urchins, and Me and My Dog series are great examples of Ron’s creative ability with pencil and a piece of paper. Being self taught he had the freedom to pursue this natural talent.

“He was an artist of imagination and rare integrity and with exception facility. He might well have achieved easy commercial success by painting popular views of Yorkshire s many beauty spots, instead he strove honourably to put something of his deep feeling for nature into his work”.