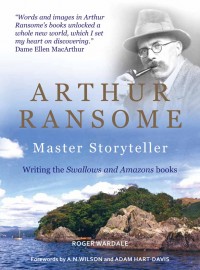 Using primary written sources, including letters, diary entries and Ransome’s own working notes, Roger Wardale expertly pieces together the fascinating story of how the twelve Swallows & Amazons books came to be written against the odds.

Arthur Ransome’s delightful adventure series of children’s books, Swallows and Amazons, has captured the imagination of children and adults alike ever since they were first published in the 1930s.

Even today, eighty years after the very first book was published, the series remains as popular and enduring as ever.

Ransome once described writing books for children as like reliving the best part of childhood, but this was far from the whole truth. His genius as a storyteller stemmed from an almost infinite capacity for painstaking perfectionism. Once Ransome had completed the first draft, he would then settle down to write a complete revision and the most difficult chapters were written over and over again. Unhappy with the illustrations produce for the first book, Ransome persuaded the publishers to go to print with none at all, save for the cover image and by book three, he’d taken the decision to do all his own illustrations.

Using primary written sources, including letters, diary entries and Ransome’s own working notes, Roger Wardale expertly pieces together the fascinating story of how the twelve Swallows & Amazons books came to be written against the odds. Wardale observes how the stories evolved from the point of view of all those who were closely involved – Ransome’s publisher, his mother, his wife, his friends and fans – as well as Ransome himself. It is an amazing story of a dedicated writer battling against the problems of ill health, a critical and argumentative wife, his own perceived shortcoming and an expectant publisher. Wardale’s account provides a new fresh look at the enduring Swallows and Amazons series and how and why they came into being – a must-read for any Ransome fan.

Roger Wardale is a founder member and chairman of the Arthur Ransome Society and has written several books on Arthur Ransome and the hugely successful Swallows and Amazons series.

Roger Wardale’s fascinating book unravels the story behind Swallows and Amazons. . . providing a wealth of background information essential to all Ransome enthusiasts.

Classic Boat, 4th April 2011
Lavishly produced with many colour photos from Wardales’ lifelong pursuit of Ransome’s haunts, in the Lake District, the Norfolk Boards and elsewhere.

Sailing Today, 2nd February 2011
the book also gives you plenty of little insights into the man behind the books…. Not to be missed if you’re a fan [of Arthur Ransome]

Lancashire Life, 6th December 2010
an authoritative account of Ransome the author, how the Swallows and Amazons books came to be and how they affected the author and his personal relationships.

Books Monthly, 11th November 2010
this present volume, whilst examining the books in huge and loving detail, also provides photographs and drawings that enhance the books and bring them to life. The photographs, in particular, are stunning… A truly fantastic work, and thoroughly reco…

Eastern Daily Press, 9th October 2010
The painful birth of what has become recognised as a children’s classic . . . is laid bare in Roger Wardale’s enthralling and enlightening new book. . . it is a sumptuously-illustrated story that Wardale, a retired junior school teacher and a founding …

Nancy Blackett Trust Newsletter, 12th August 2010
The lavishly-produced, large-format book is copiously illustrated, mainly by Roger’s own excellent photographs of locations but also by some of Ransome’s unpublished sketches and book illustrations