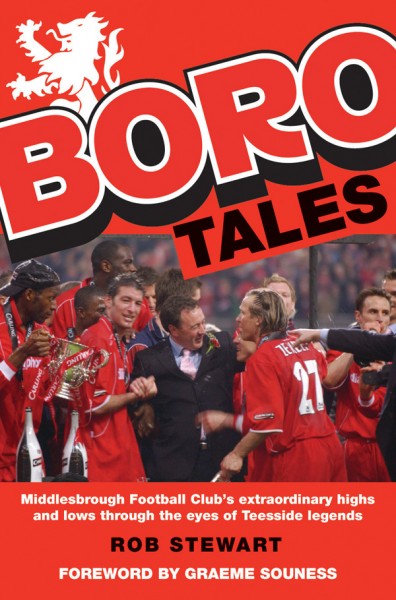 Middlesbrough Football Club’s extraordinary highs and lows through the eyes of Teesside legends.

More than 100 in-depth interviews with legendary former players and managers adorn Boro Tales. A star-studded cast of club greats, from Lindy Delapenha to Jimmy Floyd Hasselbaink, look back on their Teesside days in highly personal and illuminating interviews.

Ex-Boro midfield lynchpin Graeme Souness, who is now a highly-respected Sky Sports kicks off the book with a foreword as he takes an emotional walk down Memory Lane.

Souness sets the tone by paying a glowing tribute to former team-mates and the people of Teesside and is joined by former club favourites from down the years including:

There are also interviews with former Boro players who are no longer with us like Delapenha, Rolando Ugolini and Ugo Ehiogu.

The families of the late Brian Clough, Peter Taylor and Harold Shepherdson have also helped fill in missing pieces of the Boro jigsaw by contributing to the book.

Plus, there are special sections on the club academy, including in-depth interview with ex-academy chief Dave Parnaby and talent-spotter Ron Bone on the secrets behind Rockliffe Park success.

And there are sections devoted to the road to the incredible ‘Season from Hell’ when Boro reached two Cup finals and ended up being relegated and then the book ends on a high by focusing on the road to Carling Cup glory.

The book has been written by football journalist Rob Stewart, who covered the glory days of the Steve McClaren era for ten years for the Daily Telegraph. “It was an honour to report on Boro’s fortunes during those halcyon days under Steve McClaren and beyond,” said Stewart.

“It’s also been a privilege to speak to so many people who have been heroes to Teesside people because they gave their all for the club and played their way into the hearts and minds of supporters.

“It was fascinating to get to speak to those who made dreams come true on Teesside as they shared their stories and I am sure fans will enjoy reading their Boro Tales as much as I enjoyed piecing it together.

“I know it will go down well because the stories are very revealing. Fans won’t know whether to laugh or cry but that sums up rollercoaster ride that comes with following Middlesbrough.”

Rob Stewart is a former Daily Telegraph journalist who covered Boro’s fortunes for a decade from 2002 and interviewed club legends for MFC matchday programme Red Square from 2004 to 2015.