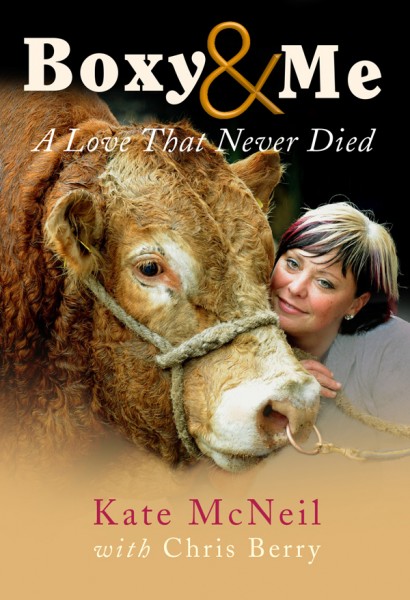 A Love That Never Died

by Kate McNeil with Chris Berry

A heart-warming tale of the bond between a young woman and her bull.

She was his eyes when he suffered near blindness, fought and won the battle in the High Court that saved him from slaughter, unmasking what appeared to have been a cover-up to a botched test in a government department, and together in the show ring they were an unbeatable team.

This is the incredible, true and highly emotional story of the relationship that developed between a young woman, farmer’s daughter Kate and her gentle giant bull, Boxy from a little rural village in Yorkshire.

It is a heart-warming tale of their bond that would bring tears, laughter, joy and despair, hope and euphoria over a decade that saw the pair remain inseparable until Kate had to make a decision that she found the hardest of all.

This is the story of an amazing animal – and how he changed my life. I love musical theatre and Andrew Lloyd Webber’s ‘Love Never Dies’ is my all-time favourite song. It’s how I feel about Boxy.

Hallmark Boxster – Boxy – was more than just a bull. It was his spirit, battling through everything thrown at him, that I will always remember with a tear never far from my eyes and a smile in my heart.

Boxy’s life was a constant struggle of overcoming massive hurdles. I’ve had many thrown my way too. Perhaps that was one of the reasons we had such a connection.  I’ve never experienced the same with any other animal. Our bond was and always will remain very special. I feel him here with me as I write.

Boxy was an outstanding show bull. He never lost. He won at every show he ever appeared and was even triumphant in the High Court in London during our battle with DEFRA. Through TV appearances he also won the hearts of thousands up and down the country. He certainly won mine long before all that, and I know I won his. I still miss him every time I go across to our cattle shed. I loved Boxy while he was alive, and I still love him now.

I want to share with you Boxy’s remarkable life story from where we left it at the end of the original book Boxster’s Story: The Truth Behind the Bull and this new book, which now tells his complete story, including his life prior to the events of 2010, a totally updated version of the first book and all of what happened afterwards in our wonderful life with Boxy.

This tells how Boxy became an all-conquering show bull, how he lived out his life after the court ruling meant he didn’t have to be destroyed as DEFRA had decreed; and how we, my husband Andrew and I, took on our own farm and started our pedigree herd of British Blonde cattle inspired by this beautiful, incredibull!

Kate is a pedigree cattle breeder with her husband Andrew on their farm in South Yorkshire. She is a farmer’s daughter of well-known cattle showman Ken Jackson.

Chris was born in Kingston upon Hull, lives near Leeds, and is a feature writer for the Yorkshire Post. He is a close friend of Kate and her family. Chris has written several autobiographies: Tony Christie, Joe Longthorne, actor Bruce Jones and TV personality Farmer Chris. He is also a crime thriller author of the Greg Duggan series.