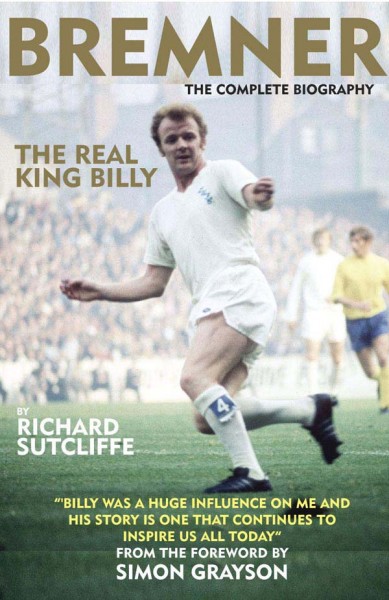 Billy Bremner remains, more than a decade on from his premature death at the age of just 54, one of footballs most iconic figures.

Available with a dedicated bookplate, signed by Richard Sutcliffe (what is this?)

Billy Bremner remains, more than a decade on from his premature death at the age of just 54, one of footballs most iconic figures. His statue stands outside Leeds United’s Elland Road home, serving as a daily reminder to fans, players and management staff alike of the huge role Bremner played in transforming the Yorkshire club into one of the most feared in Europe. North of the Border, Bremner remains equally revered – as underlined by him being one of the first to be inducted into the Scottish Football Hall of Fame.

His career was not without controversy, whether it be the lifetime ban from international football or the playing style that saw Bremner once famously described in The Sunday Times as, ’10 stone of barbed wire’. But, throughout his 18 years as a player that also included a stint at Hull City, the Scot was a figure that even his fiercest critics respected.

In Bremner – The Real King Billy, Richard Sutcliffe speaks to friends, team-mates, colleagues plus a host of players who he managed for more than a decade in charge of Leeds United and Doncaster Rovers. Discover the inside story on everything from just how close Maradona once came to signing for Bremner to the ups and downs that characterised a truly extraordinary career.

Winger magazine, 3rd December 2011
[the book is a] fine tribute

Yorkshire Post, 28th September 2011
A joker, a genius and a man for all football seasons… how Billy Bremner led Leeds to glory