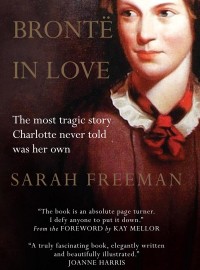 Brontë in Love (Kindle only)

When Charlotte Bronte died at the age of 38 in the Haworth parsonage where she had spent most of her life, her reputation as one of English literature’s great novelists was already assured. She had written of fiery emotion, of heartbreak and of madness, but the greatest and at times the most tragic love story she never told was her own.

When Charlotte Bronte died at the age of 38 in the Haworth parsonage where she had spent most of her life, her reputation as one of English literature’s great novelists was already assured. In Jane Eyre she had allowed passion and romance to triumph over staid Victorian convention. She had written of fiery emotion, of heartbreak and of madness, but the greatest and at times the most tragic love story she never told was her own.

It is this story that is now related in this compelling read. Here is the saga of a hopeless romantic, who naively believed true love could always conquer all. As a teenager she penned endless torrid romances and her hero was not a gentlemanly pillar of the community, but the Duke of Zamorna who had two wives, numerous mistresses and an illegitimate child.

Brought vividly to life in these pages are the parallels with Charlotte’s own life. By the time she was twenty-three she had rejected two proposals of marriage, one from a man she had known for only a couple of hours. Not for another fifteen turbulent years ? marked by another proposal and two passionate affairs ? were her childhood dreams finally extinguished. One June morning she walked into her father’s church in Haworth and married a man she didn’t love. Arthur Nicholls was neither dashing, nor ruggedly handsome, but he cared deeply for Charlotte and she finally realised companionship was more important than the idealistic passion she had gone searching for all those years before. It seemed she had at last found the one thing she wanted most of all, but within nine months both she and her unborn child were dead.

The Sheffield Star, 29th October 2010
Portrays the most famous of the Bronte sisters in a very different light to that of pioneering literary heroine and a woman who urged others to settle for nothing less than true love.

Robert Colbeck, Yorkshire Evening Post, 6th October 2010
Eye-opening new appraisal of the Victorian novelist’s life . . . with Freeman’s help, we slowly begin to understand more of Charlotte’s complex character. How, for example, her inner longings and passions, first given rein in the fictitious inhabitants…

The Press, York, 22nd September 2010
Lovers of the Bronte sisters will find it gripping for the glimpses it offers of the real Charlotte Bronte.

Sarah Freeman, Daily Express, 29th August 2010
Some stories are just too good to be true. Take Charlotte, the plain, stoic cleric’s daughter, who wrote one of British literature’s greatest love stories before her own heart had even been touched by the tiniest of flutters.

The Yorkshire Post, 27th August 2010
Three proposals, two passionate affairs of the heart, including one with a married father of six — the greatest love story Charlotte Brontë never told was her own. Her secret life is revealed by Sarah Freeman in this extract from her new book.

From the Foreword by Kay Mellor, Writer, 16th August 2010
The book is an absolute page turner. I defy anyone to put it down.

Bradford Telegraph and Argus, 11th August 2010
Brontë in Love explores the romantic longings that dominated the famous writer’s life and work.. beautifully written, fast-paced and insightful portrayal of Charlotte and her inspirations.

Yorkshire Evening Post, 2nd August 2010
A stranger-than-fiction story, highlighting just how deeply the author’s own life was intertwined with her dramatic, romantic and often torrid novels. [Author, Sarah Freeman] was determined to dispel the myths that have surrounded Charlotte’s character.