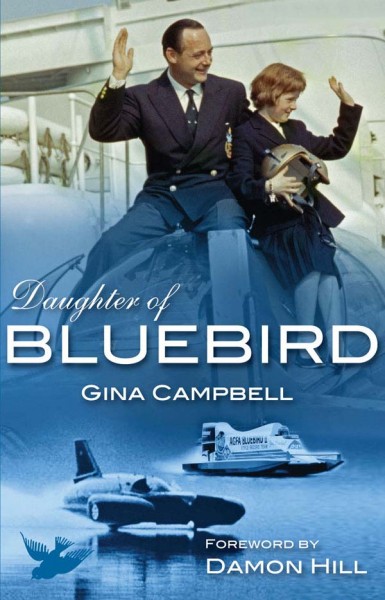 A unique insight into the land and water speed record-breaking Campbell dynasty.

Available with a dedicated bookplate, signed by Gina Campbell (what is this?)

Also available on Kindle from Amazon for £9.37

Gina Campbell, last surviving member of a remarkable dynasty, will forever be most closely associated with the fatal attempt by her father to break the water speed record in his astounding boat. In that sense she is indeed the ‘daughter of Bluebird’ and has played a ceaseless role in the boat’s restoration. In this absorbing autobiography she talks about:

Her life with Donald Campbell as father, early-day ‘celebrity’, and holder of many world records on land and water.

Her personal life three failed marriages, a suicide attempt and finding happiness in later life, only to have it snatched away; her power-boating career and setting two women’s world water speed records in 1984 and 1990.

Her reaction to her father’s death while attempting to set a new world water speed record on Coniston Water in January 1967.

Her complete shock at the discovery of Bluebird and Donald Campbell’s body by divers in 2001.

Her decision to authorise the removal of the boat and Campbell’s remains from the lake despite widespread opposition.

The decision to restore Bluebird and house her in the Ruskin Museum on Coniston Water. Her dream of once again seeing and hearing Bluebird on the lake.

Classic Motor Boat (Journal of the Classic Motor Boat Associati, 21st January 2013
Well worth reading – especially to people who are interested in boats and speed. Autobiographies can often be dull – this one certainly isn’t!