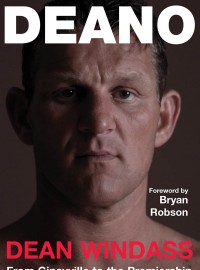 The best-selling football book on one of the game’s mavericks – now in paperback Extensively updated to include the 2007/08 season, the drama of the play-off final and the goal that took Hull to the Premier League.

In May 2008, Dean Windass scored the winning goal in the Championship Play-Off Final at the new Wembley, that took Hull City, the hometown club he supported as a boy, into the Premier League. This is the story of one of the real characters of British football. His exploits, on and off the field, are legendary. In this book he lifts the lid on what it is really like to be a professional footballer in the modern age. The training, the big games and life away from the pitch.

The best-selling football book on one of the game’s mavericks – now in paperback Extensively updated to include the 2007/08 season, the drama of the play-off final and the goal that took Hull to the Premier League.

Deano charts his journey from a pea-packer at Birds Eye to a football idol. The highs and lows of a career that has taken him from non-league North Ferriby United to Hull City, Aberdeen, Oxford United, Bradford City, Middlesbrough, Sheffield’s Wednesday and United, and back to Hull again. His story has been nothing short of dramatic.

Though never far from controversy, Deano’s reputation as an old fashioned centre-forward, hitting the target over 200 times in his career, has made him popular with fans and players alike. He recalls the incidents that earned him a ‘bad-boy’ reputation and the moments of glory that made him a sporting hero. Ultimately this is the story of a hardworking pro who stands out as a real man in the modern game. ‘Deano’ blows the lid on what it is really like day in day out to stay at the top.

The Northern Echo, 27th February 2008
Every so often, an autobiography appears to buck the trend. [Deano] contains no references to World Cups, WAGs or Hello magazine. It does, however, tell the topsy-turvy tale of an old-school footballer who rose from Humberside non-league outfit North F…

The Sunday Times, 15th February 2008
A startlingly revealing account not just of his career in football, but of growing up in what Windass said was often an unhappy home.

Hull Daily Mail, 2nd February 2008
The long-awaited autobiography . . . reveals just how it felt to live the dream and become a Tigers folk hero.

Oxford Mail, 30th January 2008
As you would expect from such a larger-than-life character, never far from controversy, his autobiography is a good read.

Sunday Herald (Glasgow), 24th January 2008
The past, which used to come at Windass in remoseless waves . . this cruel sea of remembrance and how he turned its tide. . . [it] is there in plain and simple language in this rather remarkable book.

The Daily Mail, 11th January 2008
Hull are a very different club to the one he left behind and saved from extinction . . . It is all covered in [this] warts-and-all autobiography . . . a virtual sell-out in the city.

Hull City AFC Official Website, 5th January 2008
This autobiography takes us through the life of Windass from childhood to his return to his hometown club and provides a fascinating insight into the life and career of the fans’ favourite