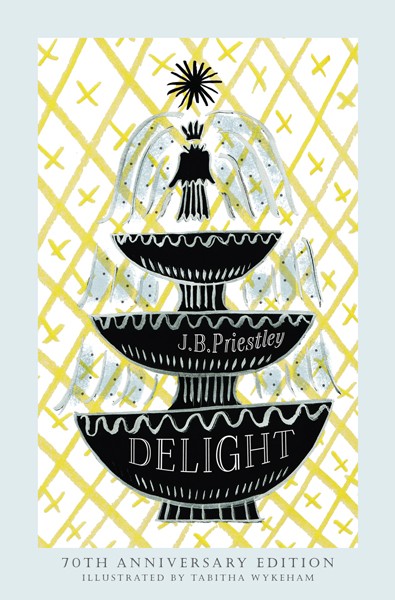 by J B Priestley

A 70th anniversary edition of one of Priestley’s most acclaimed and best loved collections of short essays.

“An exquisitely-written, generous, funny, thoughtful book about the everyday joys of being alive. I love it.” Dolly Alderton

60th anniversary edition available on Kindle for £6.99
or Kobo

Best known today as a novelist, playwright and a social commentator J.B. Priestley first found fame as a master of the short essay – a form he described as his favourite. Delight is a superb collection of one hundred and fourteen brief essays that capture and record the moments of wonder and beauty that are found beneath the surface of everyday experience. In his characteristic elegant, simple language Priestley praises the pleasures and magic of music, theatre, newspapers, travel, sport, playing games, childhood, the profession of authorship, domestic life and much more. An instant success when first published this hugely entertaining, amusing and life-enhancing book now returns to enthral and delight the modern reader.

In the years following the Second World War, there didn’t seem much to smile about, but as JB Priestley illustrated in the classic 1949 Delight, there are many joys to be found in even the simplest things. This charming book comprises a series of short essays, which all depict a simple pleasure – the smallest things in life that Priestley delighted in at that bleak time – a notion that chimes perfectly with the current national mood. Just some of the simple things Priestley enjoyed include; fountains; a walk in a pine wood; a new box of matches; Sunday papers in the country; reading in bed about foul weather; suddenly doing nothing and waking to smell bacon.

A very personal book, it is superbly written and very readable with Priestley’s sense of humour and literary flare in evidence on every page. Each self-contained essay is a joy to read and will no doubt bring a little ‘delight’ to the reader – just as Priestley originally intended sixty years ago. In ‘timeless mornings’ Priestley muses, ‘There is one kind of morning in early summer that is for me very special, the most delightful of all mornings. The sun is up and blazing somewhere but not visible yet down here, where there is a lot of gold mist about and the birds are singing from lost thickets.’

The new 70th anniversary edition of Delight contains the full, unabridged text of over one hundred of Priestley’s personal joys and pleasures, and includes an introduction written by Priestley’s son, Tom. Beautifully illustrated throughout by Priestley’s great granddaughter Tabitha Wykeham and printed in hardback, making an ideal gift book.

Charles Spencer, Daily Telegraph, 11th January 2010
What we need is a shot of joy. And I have found just the thing. JB Priestley published his wonderful collection of essays, Delight, in 1949, another period of austerity. Now reissued by Great Northern Books, it seems particularly cheering because, as P…

New Statesman, 31st December 2009
[JB Priestley] was, unquestionably, one of the 20th century’s most prolific men of letters…Great Northern Books [have] recently published a 60th-anniversary edition of one of Priestley’s most popular collections of short pieces, Delight.

Paul Johnson, The Spectator, 10th October 2009
J.B. Priestley was one of the great authors of the twentieth century and a prose writer of great skill and charm. His essays, many of which I published when I was editor of the New Statesman, were in the grand tradition of Hazlitt and Lamb, Chesterton …

Timothy West, 10th October 2009
It’s wonderful to see such handsomely-produced new editions of great works like ‘English Journey’…I didn’t know ‘Delight’, but as a fellow inveterate grumbler, I warmed to it at once!

Telegraph and Argus, 5th October 2009
Here is a delight indeed for the mind and a treat for the heart: a hardback, pocket-sized reprint of JB Priestley’s 1949 book of essays, Delight.

Observer, 27th September 2009
There is much here to raise a smile, not least Priestley’s wonderfully lucid, humorous prose, which is a delight in itself.

Scotsman, 12th September 2009
Yes, he [Priestley] was a curmudgeon…But read his book Delight, written 60 years ago but reissued this week and you see straight away what we’ve been missing. In over 100 small essays, he picks out some of life’s small moments of delight…Written in…

Daily Mail, 10th September 2009
A rediscovered masterpiece by one of England’s greatest writers captures the simple, innocent pleasures that make life worth living.

Yorkshire Post, 8th September 2009
JB Priestley knew what made him happy. While the Bradford-born author may have been a self-declared grumbler, he was also a man who found pleasure in the smallest things in life. In 1949, he decided to share with his readers the secret of hi contentmen…

Independent, 5th September 2009
Three cheers for Great Northern Books, a small Yorkshire-based publisher who have just reissued a marvellous anthology of essays by JB Priestley, first published in 1949, entitled Delight. One of the most poignant is called “The Sound of a Footbal…

Alan Plater, 2nd August 2009
I have an old and treasured edition of Delight and it will be lovely to have a shiny new one. Delightful, you might say.