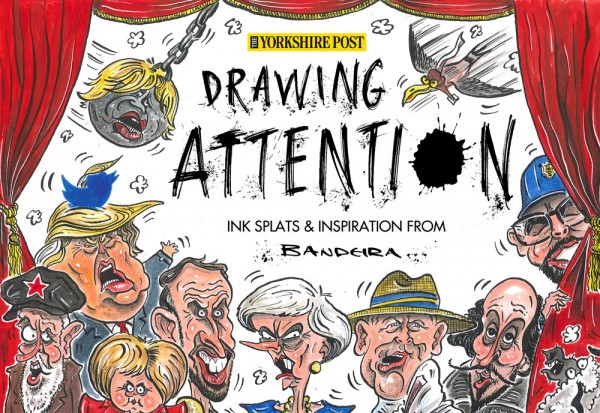 The Yorkshire Post’s talented illustrator Graeme Bandeira has whipped up quite a following with his expertly drawn insightful satire. Inside this book you will find 100 cartoons packed with an eclectic mix of humour, vibrancy and sublety. Immerse yourself and enjoy the wonderful characters that this book has to offer!

Some cartoons have received glowing tributes from the people themselves, including Yorkshire and England cricket legend Geoffrey Boycott who has kindly written the foreword and has the original cartoon hanging in his kitchen, Henry Blofeld and Ryan Sidebottom, both have original Bandeira artworks in their homes. While Prime Minister, Theresa May, who features quite prominently in this book has signed copies of her own cartoons following a meeting with Graeme.

Other cartoons produced for The Yorkshire Post and on a freelance basis have received ringing endorsements and more meet and greet opportunities, namely Ricky Tomlinson, Bryan Robson, Boris Johnson, George Osborne and the former Prime Minister David Cameron. Graeme said “It’s wonderful to meet such diverse personalities, and in some cases heroes, and challenge them on their thoughts. Reaction has always been positive and that fills me with great pride. The highlight for me was when Prime Minister Theresa May signed a couple of cartoons but refused to sign the one of her with Donald Trump’s arms wrapped around her, saying ‘my husband would not approve’ whilst looking aghast.”

“You captured my personality of life all in one drawing,I applaud you  Barnsley,beer,Cricket and dancing all done with a smile” Darren Gough

“Honoured, humbled and delighted but I’d appreciate it if you could shave half an inch off my nose……#shirleytemple #leosayer” Ryan Sidebottom

“I’ve got a good face for caricature” Gareth Southgate

“Is that for me? That’s spot on that lad” Ricky Tomlinson

“You’ve got my cheeks spot on” David Cameron

“I’ll sue you for defamation of character” Dr John Sentamu

“Graeme studies the individual so that his cartoons and caricatures capture not only the physical likeness of the person but their character, too. There’s also a large helping of humour that makes them truly unique.” Ashley Jackson