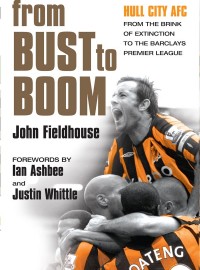 From Bust to Boom (Kindle only)

Hull City AFC: From the brink of extinction to the premier league. Behind the scenes in one of the most dramatic stories in football.

Just over a decade ago, Hull City were virtually penniless, playing in a dilapidated, empty ground and glued to the bottom of the Football League. Relegation to the abyss of the Conference looked certain. Today the club that was routinely ridiculed, briefly locked out of its own home by bailiffs and staring bleakly at the prospect of liquidation and closure is sharing in the glitz and glamour of the Premiership and doing so in a state-of-the-art stadium.

This period in the club’s 105 year-history is so extraordinary that it almost defies belief.

John Fieldhouse reveals the unfolding drama of those fraught, impoverished seasons and the club’s glorious and improbable reinvention – a transformation from bust to boom that stands as one of the game’s most remarkable and truly inspiring stories.

As the reporter tasked with covering them on a daily basis, and travelling on the team coach, he provides the real story of what happened in the dressing room, the boardroom and the boot room. He weaves his own, unique insights into a page-turning narrative about players, managers – such as ex-England international Mark Hateley, Brian Little and Phil Brown – and disparate businessmen who were drawn to the banks of the Humber.

The book will appeal to any fan – irrespective of loyalty or allegiance. It lifts the lid on Hull and allows the reader to take a rare peek at the intimate, inner workings of a club that went from walking the tightrope of a financial crisis to celebrating a Championship play-off win at Wembley.

Fieldhouse takes you behind the scenes – up close and personal.

That unique level of involvement in the dark days of 1999 has given Fieldhouse a wealth of stories to tell and he probably knows more than anyone else about how City managed to avoid the drop into the Conference, the now famous Great Escape campaign

Yorkshire Post, 18th December 2009
Fieldhouse, who for much of Hull’s rise covered the club for the local newspaper, gives an intriguing insight into what went on at Boothferry Park and KC Stadium and, as a result, ‘From Bust to Boom’ would be a welcome present under the tree of any Tig…