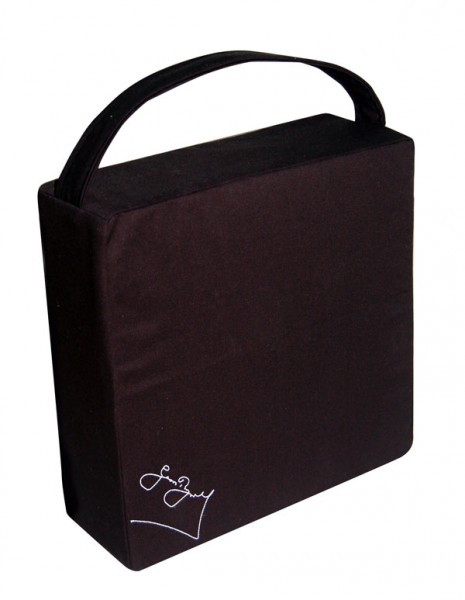 An easily-carried back-support cushion designed by Geoffrey Boycott, a must for cricket fans who want to watch matches in comfort.

As a commentator on first class cricket, Geoffrey Boycott travels the world, and there’s one item he always carries with him wherever he goes: a foam cushion. It not only guarantees that he’ll be able to watch a full cricket match in comfort, but more importantly he credits it as the solution to chronic back problems.

In 1968, Geoffrey suffered a back injury while playing for England in the 3rd Test Match against Australia at Edgbaston. The injury, a swollen disc and loss of fluid, threatened to bring his career to a premature end. Following two months of fast and intensive physio, he eventually returned to the game. But the problem had not gone away. Due to the loss of fluid in the disc, the spaces in the vertebrae narrowed and, over the years, the discomfort grew worse. Years of physiotherapy could not resolve the pain. Then, by pure chance, he hit on the idea that the problem could be directly linked to posture.

The idea came to Geoffrey during an evening at a theatre in Singapore in which the seats were very low. He noticed that a child’s booster cushion had been left in the empty seat next to his and he decided to sit on it. As a result, he enjoyed the show and did not suffer from the usual discomfort in his back. Geoffrey realised that today’s so called comfortable armchairs and soft padded settees are often too low to the ground, causing a sitting posture where the knees are above the level of the hips, causing the back to hollow.

Various experiments with different types of cushion ensued until Geoffrey was able to come up with an exact specification for a cushion that was firm, to aid posture, but with sufficient ‘give’ to make it comfortable when used for a long period. Most importantly, the depth of the cushion ensured that the hip to knee alignment was just right. He also specified a removable cover and, critically, a carrying strap so that it is easy for him to take a cushion with him wherever he goes. Geoffrey has had these cushions manufactured, for several years, to his specification, by a UK company. He uses them in his home, in the car, in restaurants, the theatre and, of course, in commentary boxes across the world. Since using the cushions, his back problems have disappeared.

So many people suffer from back problems and Geoffrey is convinced that many of these problems could be alleviated by using his specially designed cushion, which are now available.