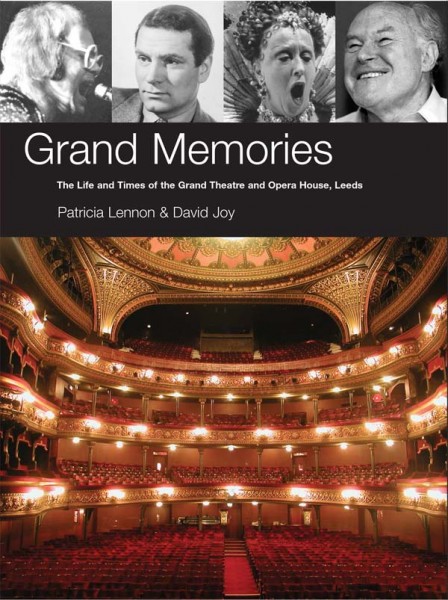 The life and times of the Grand Theatre and Opera House, Leeds.

by David Joy and Patricia Lennon

This lavishly illustrated book celebrates the history of this great building and the memories of the people who performed there.

The Grand Theatre and Opera House in Leeds is considered to be one of the best, if not the best, surviving example of British Victorian theatre design and architecture. This lavishly illustrated book celebrates the history of this great building and the memories of the people who have visited it and performed there over the years.

Built in an intriguing mix of Romanesque and Victorian Gothic styles, the completion of the Leeds Grand theatre in Briggate, Leeds was a major milestone in Victorian theatre design. Shortly after its opening in 1878, it was described as ‘probably the finest of its size in Britain’. It impressed in terms of its scale – its stage being on a par with the leading London theatres – and also in the sumptuous interior plasterwork and other decorative features. It also led the way in technical innovation behind the scenes.

This book charts the history of the theatre through the glory years of the Victorian era and the first half of the 20th century. It records its struggles, like so many theatres, to overcome falling audiences with the advent of television and its near brush with demolition plans in the sixties. It celebrates its successful re-birth in 1978 as the home of Opera North and Northern Ballet, co-existing happily alongside variety, repertory theatre and popular musicals up to the present day.

The story of this magnificent building is brought to life through the reminiscences of theatre goers, staff and performers.

Beautifully illustrated throughout with archive images and contemporary photographs of the theatre’s extravagant interiors.