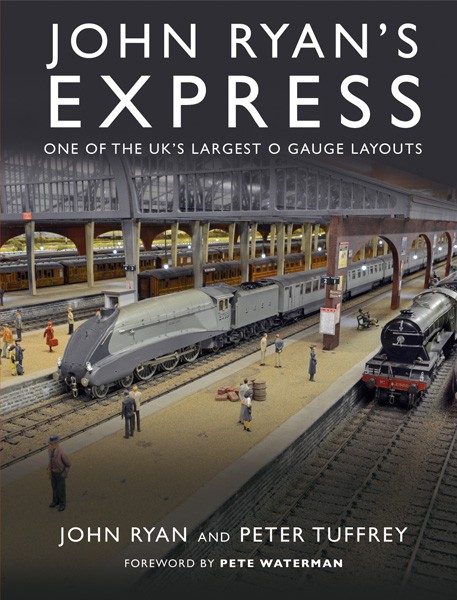 One of the UK’s largest
O Gauge layouts

by John Ryan and Peter Tuffrey

John Ryan’s model railway at Over Peover, Cheshire is a story on continual development. He first became interested in model railways at the age of five when his father took him to see A4s, A2s and A1s hurtling through Doncaster railway station on the East Coast Main Line. At Christmas 1955, he acquired his first train set a Hornby-Dublo three-rail ‘Duchess of Montrose’.

Other train sets were acquired and layouts constructed – all OO gauge – until the fascination for O gauge took control. This was in the early 1980s and when, a little later, success and finances became available all his OO gauge locomotives and rolling stock were sold or swapped for O gauge models and he began constructing one of the largest layouts of its type in the country.

The switch to O gauge coincided with his teaming up with Norman Solomon, an expert track-builder, who has been involved in the various stages of John’s present enormous layout. Other people have supplied stations, goods sheds, coal hoppers, viaducts etc.

John runs models of the locomotives he saw whilst a youngster in Doncaster during the 1950s and many are illustrated here. He also has a keen interest in the LNER locomotives built at Doncaster so that the layout can be operated in two periods – 1930s and 1950s. Carriages and wagons also fall into these two periods. Some of John’s most impressive carriages include the ‘Silver Jubilee’, ‘Coronation’ and Pullman sets.

Text within the book follows the development of model railways in Britain, Doncaster Plant Works’ association with locomotive, carriage and wagon building, John’s various railway layouts as well as touching upon his business interests. Photographs in the book show in fine detail and from different angles all aspects of the layout to such an extent that the viewer almost believes they are part of a real railway.

John Ryan was born in Doncaster in 1950. He attended Doncaster’s Danum Grammar School and then went to Nottingham University where he obtained a Degree in Chemistry. From 1978 to 2002 he was Managing Director of the Transform Medical Group. Between 1998 and 2015 John was Chairman of Doncaster Rovers Football Club. During his time there, he led Rovers from the Football Conference to the Football League Championship besides winning a number of cups. His autobiography John Ryan Dare to Dream On Life, Football and Cosmetic Surgery was published in 2010. John is currently Managing Director of MYA (Make Yourself Amazing).

Peter Tuffrey was born in Doncaster in 1953 and studied Fine Art at Leeds University. He held the position of Keeper of Fine and Decorative Arts at Doncaster Museum and Art 1975-1995, was a freelance writer 1995-2000; PR Media Consultant for Doncaster Rovers 2000-2002; and Area Manager for Music Ground and Hiwatt Amplification 2000-2003. He is now working as a freelance writer. This is Peter’s tenth book for Great Northern Books and these include Gresley’s A3s, The Last Days of Scottish Steam, The Last Years of Yorkshire Steam, Leeds Changing Places and The Yorkshire Country House.