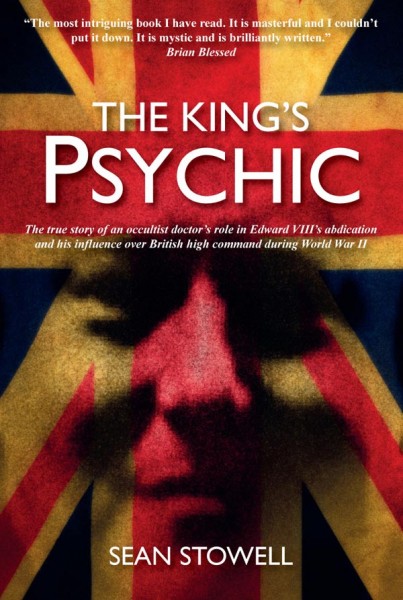 The true story of an occultist doctor’s role in Edward VIII’s abdication and his influence over British high command during World War II.

The most intriguing book I have read. It is masterful and I couldn’t put it down. It is mystic and brilliantly written. Brian Blessed

also available on Kindle from Amazon for £3.49

One man’s amazing role in the abdication of Edward VIII has remained secret since the royal crisis gripped the UK in December 1936. Hitherto erased from the records of our nation’s past, he went on to become the military’s ‘occult expert’ during the Second World War.

The only other place this story is likely to be found is in royal and MI5 archives which are still secret. The author has used facts from an MI5 file found by accident to piece together a remarkable jigsaw. It reveals how the chairman of the Queen’s bank, who secretly bankrolled fascist Blackshit leader Sir Oswald Mosley, introduced the ‘King’s Psychic’ to the royals.

A fully-qualified psychiatrist and self-help guru to London’s 1930s cocktail set, Dr Alexander Cannon was a ‘master of black magic in England’ who was described as enjoying a powerful hold over our psychologically-ailing King Edward.

Recently uncovered documents and recordings reveal a plot to oust Edward. The recordings describe claims that his fascist Blackshirt supporters tried to expose Dr Cannon in an attempt to protect the monarch they believed would ‘tackle the march of communism’. Four years later, Dr Cannon extended his sphere of influence to include many top rank military chiefs during the war. He inveigled his way into Admiralty, engineering bizarre paranormal experiments which caught attention from the highest ranks.

One such experiment included arranging a love affair between an aristocratic Special Operations Executive commander and Cannon’s own beautiful young psychic assistant. Match-maker Cannon believed telepathic communication would be far easier if the couple were in love. During the telepathy project aimed at submarine detection, they did fall in love – passionately so.

The commander deployed his new ‘skill’ during a raid on a Nazi base in Norway. An Enigma code machine discovered during the mission was brought back to England to help break German codes. Dr Cannon claimed the glory; the titled commander was summonsed to celebrate the find at Downing Street.

But was Cannon a spy, getting patients to disclose those plans under hypnosis? The more MI5 and police officers spied on him, they became increasingly alarmed. They realised Cannon was being protected by someone very powerful. But why? And who was it? Did Cannon’s influence extend as far as Downing Street?
Journalist Sean Stowell pieces together ‘The King’s Psychic’ using MI5 files, archives, journals and obscure history books to tell a hidden story about our national past. Merseyside-born Sean is currently a BBC producer based in Leeds.