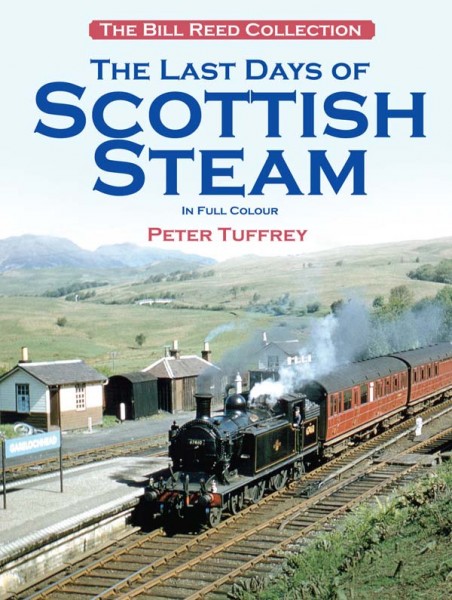 The Last Days of Scottish Steam

Available with a dedicated bookplate, signed by Peter Tuffrey and Bill Reed (what is this?)

Noted railway photographer Bill Reed shows his pin-sharp colour pictures of the last days of Scottish steam for the first time in this lavish, 160 page, hardback book. Bill, now 79, Nottingham-born and an ex loco driver, took colour slides on his many journeys north of the border in late 1950s and early 1960s. In some cases Scotland was the only area operating the once famous Gresley A4 locomotives and Bill wasted no time in capturing them on their last duties.

The pictures illustrate steam locomotives trundling along many of the branch lines now long gone; waiting in sleepy stations, long abandoned; as well as pausing on shed or dumped on scrap lines, awaiting their ultimate fate. Bill had access to most areas to take pictures and was not hampered by restrictions and regulations as he would be today. This is much to the reader’s advantage as we see shots that would normally be difficult to obtain. He also illustrates how complicated and labour intensive it was operating a steam loco; the vast coal hoppers and water tanks provide examples of this testimony.

For easy reference, the book is set out in a simple A-Z format starting with Aberdeen and finishing at Tyndrum Upper station. Noted locations are featured in-between these points, including all the Edinburgh and Glasgow sheds as well as Connel Ferry, Gleneagles, Inverurie and many more.

Bill has marvellously captured the post Second World War atmosphere on Scottish railways. If he had his time again he says he would have taken a lot more pictures. But that is no matter, we have enough here to remind us quite clearly what it was like during the last days of Scottish steam.