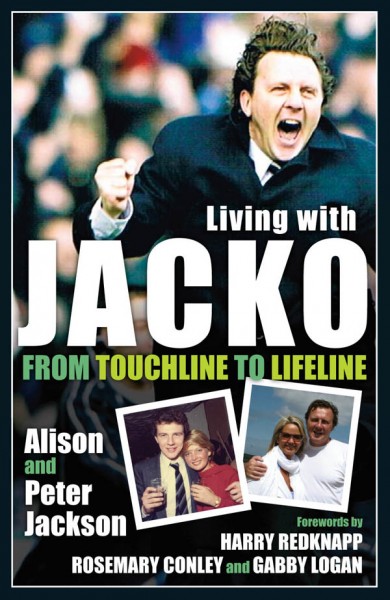 By Alison and Peter Jackson

For over thirty years, Peter Jackson and his wife Alison lived the good life, riding the football roller coaster together during his career as player and manager.

Also available on Kindle from Amazon for £7.39

Available with a dedicated bookplate, signed by Alison and Peter Jackson (what is this?)

For over thirty years, Peter Jackson and his wife Alison lived the good life, riding the football roller coaster together during his career as player and manager. When the dark days came and Peter was faced with the spectre of a life-threatening cancer, and later the end of his football career, their bond was as strong as ever.

Living with Jacko is a story shaped by football that reaches far beyond the confines of the sporting world.

• It is the story of Peter Jackson, the football man who played over 650 games in an 18-year career and has had four spells as a manager. Peter was Bradford City’s captain when, on May 11, 1985, 56 people died in the Valley Parade fire. He rescued his wife and baby daughter from the burning stand.

• The story of Alison Jackson, the high-flying career woman, a footballer’s wife long before the term WAG was invented, who supported Peter as she built a successful business career of her own.

• The story of how, when Peter was diagnosed with life-threatening cancer, Alison, once an oncology nurse, put her career on hold to nurse him back to health, detailing the family trauma in a heart-wrenching diary

• And the amazing story of how Peter, the high-profile football manager, has moved from touchline to lifeline, providing hands-on home care for the elderly, the disabled and the terminally ill in the couple’s latest joint venture.

As QPR manager Harry Redknapp, who has known Peter for nearly 40 years, says: “You won’t find too many former football managers working hands on as carers but when I heard that’s what Peter Jackson is doing, it didn’t surprise me. He’s a good sort.”

As a player, Peter edged out Paul Gascoigne and Peter Beardsley when he was named Newcastle United’s Player of the Year. As a manager, ‘Jacko’ competed with Jose Mourinho in the style stakes when Huddersfield Town played Chelsea in the FA Cup. He savoured the highs of victory in a play-off final at the Millennium Stadium?and endured the dark side of football’s glittering façade when he was sacked three times.
And worse. In 2008, he faced a bigger crisis than anything football could throw at him when he was diagnosed with throat cancer. Thankfully his ordeal had a happy ending.
Throughout his career, the one person who has known the real ‘Jacko’ has been Alison, his wife for over thirty years, who has learned the hard way how to negotiate the balancing act of football wife, mother to their two children and successful career woman.
This is their extraordinary story, a story that will appeal to male and female readers alike.