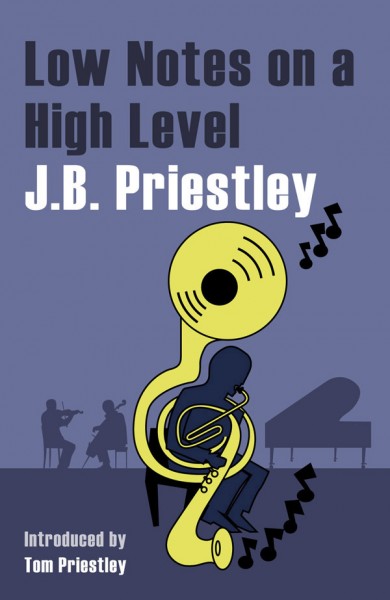 Low Notes on a High Level: A Frolic
by JB Priestley

Sir Lancelot Telly is the flamboyant and only moderately talented Musical Director of the English Broadcasting Company. His young, handsome and considerably more talented assistant is Alan Applerose. Both are delighted when Stannsen, the Norroland, and the world’s greatest composer, announces that he has completed his Tenth Symphony and that in recognition of an official visit to Britain by the Norroland President he has offered the honour and privilege of the first performance to the EBC Symphony Orchestra, of which Sir Lancelot is the conductor. But there is a snag: the score includes a part for the Dobbophone, a seven-foot-high cross between a Sousaphone and a large contra-bass bassoon. This is the creation of an eccentric inventor called Dobb, who is its only performer. It seems that Dobb and Stanssen were once good friends but fell out over an obscure game they were playing called Strunshka; Dobb won but Stannsen refused to admit defeat. Dobb told Stannsen that unless he apologized then their friendship would be over. Now, according top Dobb, the inclusion of the Dobbophone in the score of the new symphony is Stannsen’s way of trying to cheat and bully him into going back on his word. Dobb refuses to take part in the performance, but without the Dobbophone, Stannsen refuses to allow the performance of his symphony. How this impasse is sorted out with the help of the beautiful Inga Dobb, the inventor’s niece and the composer’s goddaughter, together with a range of other larger-than-life characters, makes for an amusing and entertaining tale.

Also featuring is the setting up of a pirate radio station and various Norroland customs which involve imbibing of schnapps and a quartet of comic inventors of musical instruments as outrageous as the Dobbophone, who, after being turned down as substitutes for the performance of Stannsen’s symphony, are signed up as an hilarious act at the North London Hippodrome.

In Low Notes on a High Level Priestley satirises the broadcast media with its lunatic fringe of avant-garde poets and playwrights, inane panel games and their only too receptive audiences.

A quirky satirical comedy from 1954 by one of the twentieth century’s most prolific, influential and versatile writers.

The world’s greatest composer, Stannsen of Norroland has completed his Tenth Symphony and to coincide with the official visit of Norroland’s President to Britain he has offered the honour of its world premiere to the English Broadcasting Company Symphony Orchestra, and its outlandish and moderately-talented principal conductor, Sir Lancelot Telly. The Royal Festival Hall is booked, Royalty is invited, there is a heatwave of publicity, but there is a huge problem: Stannsen’s score includes a part for a seven-foot-high instrument called the Dobbophone, invented and played by his former best friend Dobb. The two men have fallen out and Stannsen hopes his symphony will reconcile them. Dobb refuses to participate and without him there can be no performance. There is panic and dismay at the E.B.C., not least for Sir Lancelot who sees his chance of fame slipping away from him. Enter the beautiful Inga Dobb, niece of the instrument’s inventor and goddaughter of Stannsen who will attempt to break the deadlock between the two men and reunite them as friends. Will she succeed? Will the performance go ahead? Will Sir Lancelot conduct this great symphony?

Demonstrating Priestley’s love of music along with his playfulness and versatility as a writer, this zany and at times anarchic romp satirises the contemporary world of broadcast media, its avant-garde playwrights and poets, its philistine administrators and its inane panel games and their too receptive audiences.

As our national broadcaster comes in for ever increasing scrutiny, this is very much a novel for today.

‘Here is all the old Priestley magic …magnificently having fun.’ The Evening Gazette (Middlesbrough)

‘Priestley is timeless, and universal. He has so much to say about the human condition, and does it in a way that’s truthful, perceptive and often very funny.’ Timothy West

“There is a joy, a sort of exuberance in what he enjoys, a youthfulness…  A well of love for his fellow man which really does come across in the writing.” Sir Alan Ayckbourn