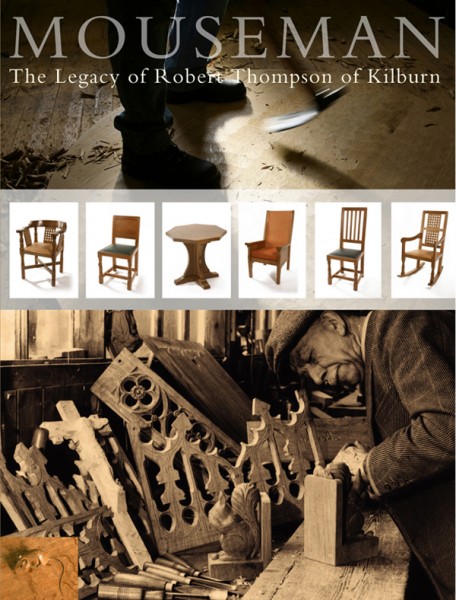 By Patricia Lennon and David Joy

The life and work of Robert Thompson of Kilburn, the early 20th century craftsman of fine oak furniture marked with a hand-carved mouse.

The most comprehensive guide to Mouseman furniture and where it may be found throughout the UK.

The life and work of Robert Thompson of Kilburn, the early 20th century craftsman of fine oak furniture marked with a hand-carved mouse.

The most comprehensive guide to Mouseman furniture and where it may be found throughout the UK.

Robert Thompson, known as ‘The Mouseman’, of Kilburn, North Yorkshire (1876-1955) is widely regarded as having been one of this country’s finest craftsmen of hand carved, traditional oak furniture. His life story is fascinating – a quiet man, who never moved away from the cottage in which he was born in his home village of Kilburn in North Yorkshire. Nonetheless, his work was discovered by leading architects of the day who commissioned major pieces for cathedrals, stately homes, and municipal buildings across the UK and overseas.

Thompson’s signature is the carved mouse which appears on all his pieces and which has inspired legions of ‘mouse-hunters’ to seek it out wherever his furniture is sited. This book provides several in-depth “mouse trails” across the country which allow readers to view some of the mouse stunning examples of Mouseman furniture. The new edition also encompasses other trails across Britain, particularly in and around London where there are many exquisite examples of Mouseman furniture, most notably in Westminster Abbey and Rothschild’s prestigious HQ.

Today, Robert Thompson’s great grandsons and his craftsmen continue to produce fine oak furniture to the same standards and in the same workshop in Kilburn ? ensuring that the Mouseman name continues to live and the army of Mouseman aficionados continues to grow. In fact, the company is fast becoming one of the most renowned oak furniture makers in England and looks set to be the next Chippendale. New commissions continue to flood in and auction prices are rocketing. From humble beginnings, Robert Thompson’s craftsmen now work with royalty, celebrities as well as top UK designers, on increasingly high-profile commissions.

Illustrated with archive images from the family of Robert Thompson, including many sketches and designs of his work, and also newly commissioned pieces of Mouseman furniture in visitor locations across the UK.

This is the definitive, and most comprehensive summary of this outstanding, early 20th century craftsman and as such is a ‘must-buy’ for anyone interested in Mouseman furniture or twentieth century arts and crafts furniture makers.