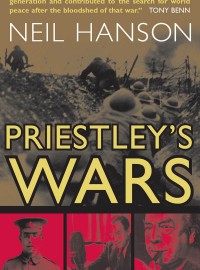 A special collectors’ edition, this is a long-awaited re-issue of a classic work by J B Priestley, a literary giant, social commentator and humanitarian.

Soldier, writer, broadcaster and peace campaigner. The untold story of J B Priestley’s role at the centre of British 20th century history. Priestley’s Wars is a unique insight into the two world wars and the foundation of the CND movement through the eyes of one of the century’s greatest writers.

Containing previously unpublished letters from the WW1 battlefields, and the ‘Postscripts’ broadcasts that Churchill tried to ban.

This major historical work by the acclaimed historian, Neil Hanson, traces the personal odyssey of one of Britain’s greatest and best-loved literary figures, JB Priestley. This revealing book opens with Priestley as an enthusiastic volunteer in the First World War. Published here for the first time are the letters he wrote while serving on the Somme, which vividly evoke the full horrors of trench warfare and which also mark the start of a transformation that would ultimately make Priestley one of the most influential voices for peace and disarmament.

In the inter-war years, Priestley became a hugely successful author, playwright and broadcaster, and in the early years of the Second World War, his ‘Postscripts’ radio broadcasts, immediately following Winston Churchill’s addresses to the nation, attracted an audience of 16 million listeners. However, Priestley’s appeals to ensure that, this time, Britain’s troops really should come home to a transformed land “fit for heroes” infuriated Churchill and the broadcasts were abruptly dropped. This book includes copies of the ‘Postscripts’ that have never previously been published and which shed light not only on Priestley social and political concerns but also on the growing tide of national feeling that swept the Labour Party to power after the war.

In the 1950s, Priestley’s journey from youthful soldier to passionate opponent of the horror of nuclear war was completed when he became one of the co-founders of the Campaign for Nuclear Disarmament (CND) launched with the famous London to Aldermaston march in 1958.

Written with the full co-operation of JB Priestley’s sons, Tom Priestley and Nicholas Hawkes, and beautifully illustrated, including images from the J B Priestley Archives, Priestley’s Wars tells the full story of one of the literary giants of the 20th century, and his role in the military conflict and social change that defined the ‘Great War to Cold War’ era.

Everyone’s War magazine, 16th November 2008
This is a fascinating, untold story of J. B. Priestley’s role at the heart of twentieth century British history as a soldier, broadcaster and campaigner. It is a revealing book about one of Britain’s best loved literary figures” “This readabl…

The Northern Echo, 11th November 2008
This collection, produced with the co-operation of [JB Priestley’s] son and presented with an informative running commentary by the editor, showcases Priestley as a robust communicator, critical of much in society, yet never losing his faith in humanity.

Tony Benn, 2nd November 2008
Priestley shaped the political thinking of a whole generation and contributed to the postwar consensus around the creation of the Welfare State and the search for world peace after the bloodshed of that war.

Craven Herald and Pioneer, 9th October 2008
95 per cent of the book contains material that is out of print. There is also a good deal that has never been used before in book form.

Daily Telegraph, 5th October 2008
His Postscripts talks [are] as good as anything Orwell did. . . Priestley’s essays deserve a new audience: he understood that people ‘recognise in an instant when something that is at least trying to be real and true is being said to them.’ . . . Pries..