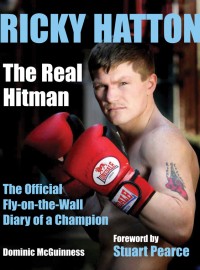 Unprecedented access to Ricky Hatton by the book’s author and photographer has produced this unique insight into the Hitman’s life inside and outside the ring; his training; his fight preparation; his family, friends and the people who support him.

Unprecedented access to Ricky Hatton by the book’s author and photographer has produced this unique insight into the Hitman’s life inside and outside the ring; his training; his fight preparation; his family, friends and the people who support him.

For over four months, day in, day out, sports journalist, Dominic McGuinness and award winning photographer, Ben Duffy, were given unprecedented access to Ricky Hatton, to record every aspect of his life. The result is this unique book, which gives a fascinating, fly-on-the-wall view of the world of the boxing champion.

It provides a comprehensive, fully illustrated account of the mental and physical preparations necessary to compete at the very highest level whilst giving an insight into the unique atmosphere and colour of the Phoenix Camp Gym, the international boxing world, Ricky’s family, his mates and the celebrity circuit.

The book explores how Ricky – a man who admits to liking a pint and who gains three stone after each fight – gets himself physically and mentally fit for a 12 round world title bout. How has the Frank Warren fall-out affected him? How painful was it handing back his IBF and WBA belts he’d worked so hard to win?

Contributions from all those who work with Ricky Hatton on a daily basis, including his father, Ray Hatton, his trainer, Billy (The Preacher) Graham and his nutritionist, Kerry Kayes as well as his ‘A list’ sporting and celebrity friends.

The book will appeal to the many thousands of passionate Hatton fans; all boxing aficionados; anybody interested in sport and fitness; as well as those who simply want to know what it takes to make it to the top.

Alan Hubbard, The Independent on Sunday, 26th October 2006
probably be the choice of boxing aficionados apart from Norman Mailer’s 1974 epic The Fight on the Rumble in the Jungle, we can’t recall a boxing book similarly detailed

Ricky Hatton, 23rd October 2006
This is a great book, something I’ve wanted for a long time. It tells boxing fans what it really takes to be a champion fighter. I’m flattered that I’m the subject of it.