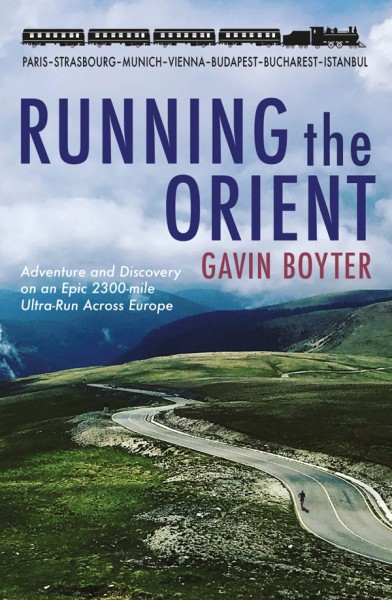 “There are running challenges, and then there’s this. A truly inspiring tale of endurance and resilience that will make anyone want to don a pair of trainers and just start running.” Sean Conway

“Gavin Boyter’s bold sense of adventure and discovery shines brightly in Running the Orient, an epic journey of both outward and inward exploration.” Dean Karnazes

Armed with a toilet trowel and a converted Mazda Bongo called Roxy, self-styled ‘ordinary’ ultrarunner, Gavin Boyter, embarks on his latest long-distance challenge: to run the 3400km from Paris to Istanbul along the route of the world’s most illustrious railway journey, the Orient Express.

And, despite work on Roxy having hampered his training programme, Gavin remains undeterred and plans to run through eight countries, to cross 180 rivers and to ascend 16,500 metres, through forests, mountains, plains and major cities – aided all the way by temperamental mapping technology and the ever encouraging support of his girlfriend, Aradhna.
En route, Gavin will pass through urban edgelands and breathtaking scenery, battlefields and private estates, industrial plants and abandoned villages, and on through a drawn-back Iron Curtain where the East meets West.

He will encounter packs of snarling, feral dogs, wild boar, menacing cows, and a herd of hundreds of deer. But he will also meet many fascinating characters, including a German, leg-slapping masseuse, music-loving Austrian farmers, middle-class Romanians, itinerant Romanies, stoic soldiers, and boisterous Turks.

However, confined to the cramped conditions of Roxy, and each other’s company, Gavin and Aradhna’s journey is not only a test of the endurance and stamina required to put in the hard miles, but of their relationship, too. After all, if they can survive this challenge, they can survive anything.
But will Gavin’s legs make it all the way to Istanbul, where he has planned a special surprise for Aradhna?

AUTHOR
Born in Edinburgh in 1970, Gavin Boyter studied Philosophy and English Literature at Edinburgh University. He later studied at Sheffield where he gained a master’s degree in Film and TV Drama.

Gavin has been a writer ever since he could hold a pen. In 2015, he wrote and directed the romantic comedy film, Sparks and Embers, starring Kris Marshall and Annelise Hesme. He has written numerous screenplays, including the psychological thriller Nitrate (with Guy Ducker). He recently completed his first novel, Elena in Exile, a crime story about a Romanian single mother adrift in London’s colourful, and sometimes dangerous, Soho.

An occasional runner until his mid-thirties, Gavin only became serious about covering long distances when he ran his first ever race – the 2005 London Marathon!
His first book Downhill From Here: Running From John O’Groats To Land’s End was published in 2017.