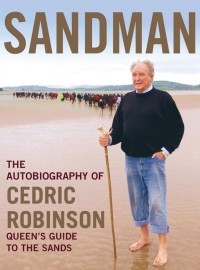 The Autobiography of Cedric Robinson.

The fascinating life story of the Queen’s Guide to the Sands of Morecambe Bay.

Cedric Robinson has become internationally famous over the last forty six years in his unique role as The Queen’s Guide to Morecambe Bay Sands, a position which he has now held longer than any of his predecessors going right back to the reign of Henry VIII.

Since his appointment in 1963 Cedric has transformed what was becoming an archaic piece of history into a modern day recreational institution. From modest beginnings escorting only a handful of walkers, Cedric now safely guides around 10,000 people a year across this beautiful and fascinating landscape of North West England.

Although now aged 76, Cedric’s passion and enthusiasm for his chosen calling remain undiminished. His unique knowledge of Morecambe Bay and its shifting sands is regularly called on by the media and rescue organisations. He has received numerous honorary degrees and awards but remains a modest man happiest in the landscape he so clearly loves.

In this his eagerly awaited autobiography, Cedric looks back on his amazing life, early fishing days, family, the walks, special awards, celebrity and royal crossings and much more. It is a truly fascinating read and beautifully illustrated book.

Telegraph and Argus (Bradford), 30th January 2010
This glossy coffee-table book includes wonderful old photographs of cocklers and shrimpers with horse-drawn carts waiting to load up with a catch from the tides

Yorkshire Evening Post, 5th December 2009
[Cedric has] a fund of memories and anecdotes, which he shares with us in this fascinating and, at times, surprisingly moving autobiography…his enthusiasm for his unique job still undiminished, Robinson is both passionate and modest…Sandman is an u…

Hunter Davies, 3rd December 2009
I can’t think of a better way of communing with nature than walking with Cedric, feeling part of the elements, in tune with sand and sea and sky and, on the horizon, the Lakeland landscape. The most natural element of all is Cedric himself, so humble, …

The Visitor (Morecambe), 18th November 2009
Sandman is a beautiful book, full of photographs and anecdotes spanning the length of Cedric’s career…[it] gives an incredibly personal insight into his home life at his beloved Guide’s Farm in Grange.

North-West Evening Mail, 5th October 2009
covers everything from his humble beginnings growing up in the fishing village of Flookburgh to his later life mingling with Royalty