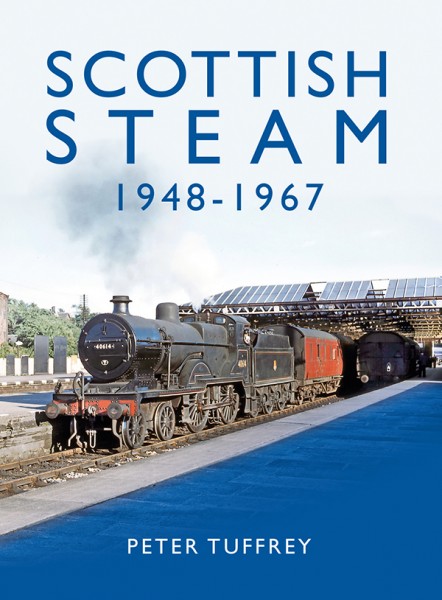 A beautiful hardback book, featuring over 230 stunning photographs of locomotives on the Scottish railways in the final years of steam traction

Comprising one-third of the land mass of mainland Britain, Scotland provided a diverse background for railway photographers to record the end of steam.  As dieselisation radiated northward from Southern England, the country became a refuge for locomotives and many enthusiasts rushed with their cameras to record the demise of a great period in British history.

Scottish Steam 1948-1967 presents this era using nearly 250 superb colour and black-and-white images.  The focus is on the various locomotives serving under BR at this time.  These ranged from old pre-Grouping locomotives still in service, to the many LNER and LMSR designs introduced to modernise the respective motive power stocks after 1923.  Following Nationalisation, many of the BR Standard Class varieties saw use in Scotland, whilst heavier freight duties were handled by ex-War Department ‘Austerity’ 2-8-0s that were brought into service under BR from the many war surplus engines.

The locomotives have been pictured at locations across Scotland.  From the cities of Edinburgh and Glasgow – including their environs – to places on the main lines radiating southward, such as Burnmouth and Beattock.  Several sites on the Waverley route are included, in addition to the Ayrshire coast.  Northward, Stirling, Alloa, Dundee, Aberdeen, Perth, etc., are featured, as is the West Highland and far north of Scotland – Thurso and Wick.  The images have been taken at the lineside, stations, sheds, workshops and industrial locations.

The book offers a fascinating record of the end of steam in Scotland.