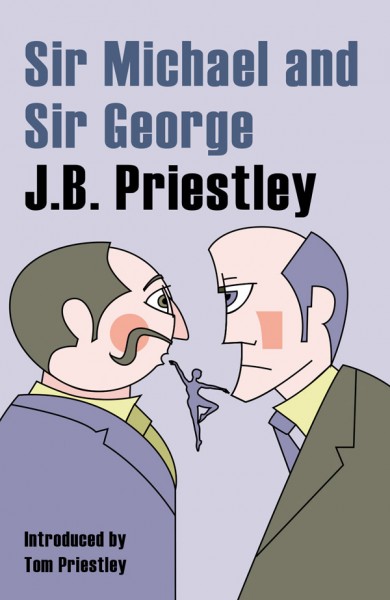 Sir Michael and Sir George: A Tale of COMSA and DISCUS and the New Elizabethans
by JB Priestley

Sir Michael Stratherrick is the Director of COMSA – the National Commission for Scholarship of the Arts. Sir George Drake occupies the corresponding post in DISCUS – the Department of Information and Cultural Services. The two men are deadly and competitive rivals in the world of the subsidised arts, each both jealous and contemptuous of the other. Whereas Sir George is a sober administrative civil servant who is not particularly interested in the arts, Sir Michael is a lustful philanderer with no great love of administration or for the institution of marriage. One of Sir Michael’s numerous lady friends is Sir George’s wife, Alison, which of course gives him insights into the workings of the rival arts group and its director. Although not the marrying type, when Tim Kemp, an ex-employee of COMSA, now with DISCUS, plants a beautiful young typist onto the COMSA staff as a spy, Sir Michael falls madly in love and his carefree, single days are threatened.

The rivalry between the two men and the two organisations heats up when each learns that Her Majesty’s Treasury plans to abolish both and set up a new and expanded arts department within the Ministry of Higher Education. Enter I. B. C. T.N. Jones to audit each department’s finances. There can only be room for one director in the future and so begins a round of attempts to out- manoeuvre and undermine each other.

In this full-blown satire, Priestley attacks arts councils, the whole world of contemporary arts, those who support them with public money as well as civil service types, bureaucrats and politicians generally.  Although he savages his assorted characters, he also displays his trademark humanity showing us some sympathy for their plight.

Sir Michael and Sir George is one of J. B. Priestley’s most entertaining post-war novels.

A satirical comedy first published in 1964 by one of the twentieth century’s most prolific, influential and adaptable writers.

‘Most people here don’t give a damn about scholarship and the arts, and they include nearly all the men who are running the country. They may pretend to, but they don’t really care …’

Deadly rivals Sir Michael Stratherrick (womaniser and Director of COMSA) and Sir George Drake (Director of DISCUS with little interest in the arts) are threatened with extinction. Her Majesty’s Treasury plans to abolish both organisations and set up a new and expanded arts department within the Ministry of Higher Education. There can only be room for one director. So begins a contemptuous fight for survival with both men and their organisations seeking to out-manoeuvre and undermine each other at every turn. As the action moves through the shire counties and the North of England, the strip-tease bars of Soho and the plush surroundings of expense account Mayfair, things become even more complicated as we learn that along with their jobs, Sir George’s marriage and Sir Michael’s carefree single days are also under threat.

With Priestley’s characteristic humanity and sympathy for his characters’ plights, this tremendously entertaining satire attacks the whole world of subsidised arts councils, those who support them with public money, civil service bureaucrats and the machinations of Government politics.

As bureaucracy and the reach of Government continue to expand, this is very much a relevant novel for our time.

‘To me Priestley was a writer who produced work of dazzling variety and rich profusion. He was wise and had integrity.’ Stan Barstow

‘As a writer of fiction he belongs in a great English realist tradition that includes Bennett, Wells and Galsworthy’ Michael Billington