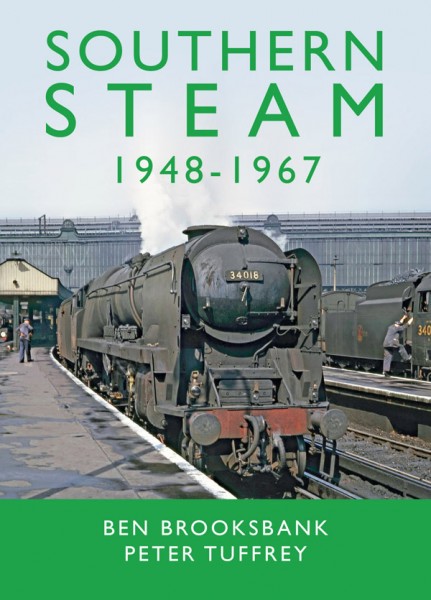 AVAILABLE FOR PRE-ORDER
By Ben Brooksbank and Peter Tuffrey

A beautiful hardback book, featuring over 250 stunning colour and black and white photographs of steam locomotives working across much of the South of England.

Southern Steam 1948-1967 contains over 250 stunning colour and black and white photographs of steam locomotives working across much of the South of England.

A section is provided for all the important SR locations in London, such as Waterloo station, Stewarts Lane shed, Bricklayers Arms shed, Clapham Junction, Victoria station, etc.  There is also a selection of images taken on the Isle of Wight which came under the jurisdiction of the SR.

A large number of the area’s most recognisable classes are presented: Bulleid’s ‘Merchant Navy’ and ‘Battle of Britain’/‘West Country’ Pacifics; Maunsell ‘King Arthur’ and ‘Schools’, amongst others; Urie
4-6-0s; Drummond M7; Wainwright C Class.  The old Adams 415 Class engines have been captured on their native soil, whilst equally ancient Stroudley E1s have been encountered.  Also making appearances are BR Standard Class engines, ranging from the ‘Britannias’ to the 4-6-0s, 2-6-0s and 2-6-4Ts.

The locomotives have been captured in many evocative scenes of the era, comprising those at stations, both main line and smaller local facilities, engine sheds and from the lineside.

The photographs are accompanied by well-researched and informative captions.

The preservation movement was born in the Southern Region and hopefully this collection of images helps remind everyone that the steam locomotives left are worthy of continued interest as representatives of a bygone age.