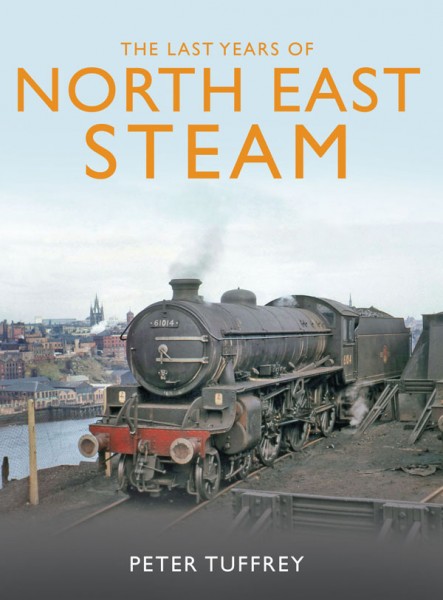 A beautiful hardback book, featuring outstanding photography including rare colour images of steam locomotives trundling along branch lines  and travelling at speed on main lines in the North East from the late 1940s to the early 1970s. Thus it covers the first years of British Railways and the last workings of steam in colliery yards.

“Drawing from a selection of photographic resources, it achieves its title’s ambitions with considerable aplomb… a must for North Eastern enthusiasts… it is also of interest to general readers too, who will find much to enjoy in its pages”
Steam World Magazine

The Last Years of North East Steam contains 270 superb colour and black and white photographs of steam locomotives working in and around the North East from the late 1950s to the end of steam in the region. Featured are the well-known areas such as Newcastle, Sunderland, Darlington, Middlesbrough, Blyth, Stockton, Durham, Washington, Bishop Auckland, Chester-le-Street, Alnwick and Alnmouth.

There are stunning scenes captured by very competent amateur photographers at stations, sheds and from the line-side. It has to be remembered that the quality of colour slides was not assured at the period covered and only the best have been included here after many hours of sifting through hundreds of examples.

Several of the Region’s well-known classes are included. Amongst them are the Raven Q6; Worsdell J27; Gresley A3, A4, V2, A1/V3; Thompson B1; Peppercorn A1 and K1; BR 9F. The many locomotives employed at collieries are presented, such as those resident at Ashington, Easington, Lambton, Philadelphia and Wearmouth.

The book also illustrates the many industrial locomotives formerly used in numbers at steel works, such as Consett and Jarrow Metal Industries.

The captions are informative without containing too much railway jargon and will be enlightening to a wide range of readers.