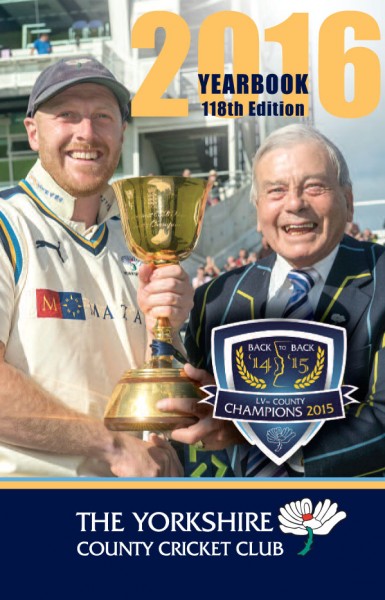 The 118th edition of Yorkshire County Cricket Club’s Yearbook is packed with words and pictures which tell the pulsating story of how captain Andrew Gale and his team scooped county cricket’s greatest prize – the LV= County Championship title for the second year in a row. Reports, scorecards and pictures cover the action from the very first ball of the season to the magical moment when they were acclaimed as victors. Plus much, much more!

The 118th edition of Yorkshire County Cricket Club’s Yearbook tells the story in words and pictures of how Andrew Gale and his star-studded team pulled out all the stops on their way to retaining the LV=County Championship Trophy, the greatest prize of all in domestic first class cricket. It was a dazzling season for the White Rose in which Jonny Bairstow and Gale himself both topped 1,000 Championship runs while the up-and-coming Jack Leaning was not far behind them. Once again, Jack Brooks was Yorkshire’s leading wicket-taker in the competition, strongly supported by Tim Bresnan, who was in excellent all-round form, and the ever-reliable Steve Patterson, plus Liam Plunkett and the evergreen Ryan Sidebottom. Their exploits and those of all of their team-mates make for absorbing reading. Contained within its pages are:

and much, much more!