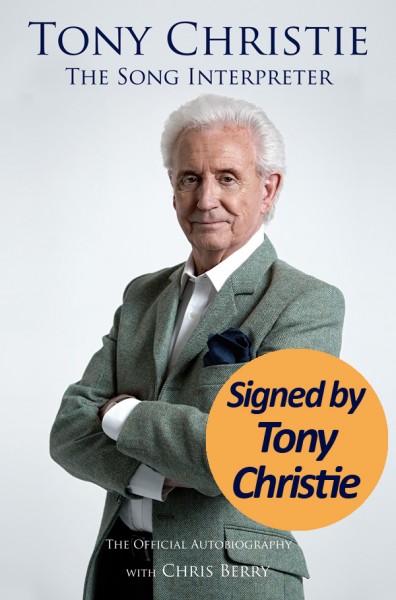 Multi-million selling recording artist, Tony Christie, looks back on his life and six decades as an international performer.

“charmingly frank and self-deprecating autobiography… The story is told with a combination of nostalgia and humour, in straightforward language that makes it feel as though the entertainer is chatting to us from the stage between songs.”
Christopher Stevens, Daily Mail

Available with a dedicated bookplate, signed by Tony Christie
(example of bookplate)
(Enter the name(s) and dedication(s) in the notes box below ‘Dedications/Gift Messages’ section, at the checkout)

Tony Christie has topped the charts in countries all around the world with ‘Is This The Way To Amarillo’, ‘I Did What I Did For Maria’, ‘Avenues & Alleyways’ and has achieved critical acclaim for his more recent works with Richard Hawley and Jarvis Cocker. Tony’s albums have achieved several Gold and Platinum discs and he was the only singer in 2005 to have a single release and album simultaneously at Number 1.

Now for the first time Tony tells of his illustrious, colourful career that started in the small South Yorkshire town of Conisbrough and today sees him as a singing legend with fans throughout the globe. It is a story packed with emotional and financial highs and lows, fantastic characters and Tony’s deep-rooted love of family. If you thought you knew Tony Christie you will now as he opens up about his loves, his sorrows and his amazing life!

TONY CHRISTIE: The Song Interpreter is the official autobiography of an icon in popular music whose voice sounds as good today as when he first hit the charts in 1971.