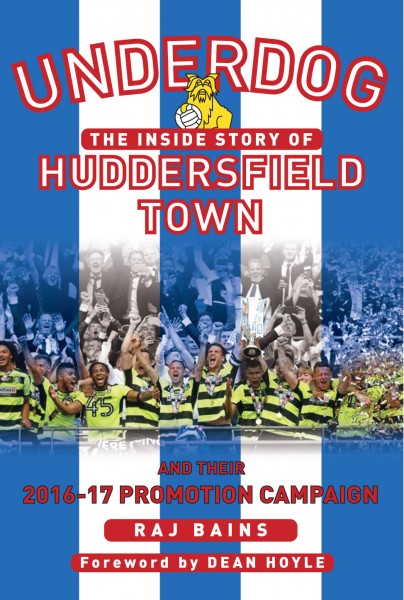 Get the name of your choice printed in the list of Terriers fans at the back of the book.

Underdog is the inside story of Huddersfield Town’s remarkable 2016-17 promotion campaign.

Perennial stragglers in the Championship, the introduction of David Wagner as head coach in November 2015 was the catalyst for change the club was in desperate need of. Hired from Borussia Dortmund’s second team, Wagner set about changing the culture of the club, their playing identity and ideology, capturing the imagination of the entire town as he did so.

In his first full season in charge, Wagner lead Huddersfield to the top flight of English football for the first time in over forty years, finishing fifth in the league before coming through the rigours of the play-offs. Underdog looks in to every kick, decision, win and loss that went in to gaining promotion – from losing to Wigan Athletic at home to Christopher Schindler’s crowning penalty at Wembley, via several failed attempts from other clubs to poach David Wagner away from the Terriers.

Speaking to the key personnel involved in Huddersfield’s historic achievement, author Raj Bains provides an all-access pass in to the 2016-17 season, with searingly honest testimony from chairman Dean Hoyle, members of the playing squad, long serving members of Town staff and Wagner himself all included to help tell the tale of the side’s unprecedented journey to the biggest sports league in the world.

Raj Bains is a sports, technology and popular culture journalist from West Yorkshire, contributing to the likes of The Guardian, FourFourTwo, VICE, Betfair, Unibet, Yorkshire Post, Huddersfield Examiner, When Saturday Comes, Rugby League World and more. Born and bred in the town, he has been a Huddersfield season ticket holder for several years, often covering the club for both regional and national titles.