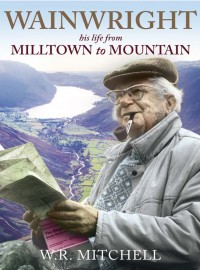 The biography of Alfred Wainwright. His life from Milltown to Mountain.

Available with a dedicated bookplate, signed by W R Mitchell (what is this?)

Alfred Wainwright (1907 – 1991) became the proverbial legend in his own lifetime. He made the Lakeland fells his own through a series of hand-drawn, hand-written guide books. Over 200 fells became known as ‘Wainwrights’. A society has been named after him. His exploits have been recently emulated in the BBC television series Wainwright Walks.

This ground-breaking, richly anecdotal and personal book about Wainwright also recalls his young days in the Lancashire milltown of Blackburn and his fascination – as a lone walker – for wild places in Lancashire, along the Pennines, which have been described as ‘the backbone of England’, and in the north-west extremities of Scotland. He devised the popular Coast to Coast Walk, from the Irish Sea at St Bees to the North Sea at Robin Hood’s Bay.

The author, Bill Mitchell, is one of a quartet of fell walkers who were personal friends of AW and his wife Betty. She also features in this book, which – far from being a dull treatise on fell walking – enters the quirky, ever fascinating world of its best-known exponent and the wife who played a strong supporting role.

W R Mitchell, MBE, Hon D.Litt, is the author of nearly 200 books, many of which concern the Settle-Carlisle railway. His journalistic career began at the Craven Herald & Pioneer in Skipton, from where he moved to Clapham, the headquarters of The Dalesman, a magazine he was to edit for about three decades. For much of that time he was also editor of Cumbria magazine.

In retirement, he raised the imprint Castleberg for a string of books he compiled, mainly about everyday life in the Dales and Lake District. His most recent book, also published by Great Northern, was Thunder in the Mountains: The men who built Ribblehead.

Bill’s honorary degree was awarded by the University of Bradford. In 2007, the Outdoor Writers’ and Photographers’ Guild presented him with their major Golden Eagle award. He was said to be one of the founding fathers of outdoor writing.

BBC Countryfile Magazine, 14th January 2010
WR Mitchell’s very individual book about the life and work of Alfred Wainwright… is written from the heart… His book is a quirky blend of historic biography, anecdote and personal reminiscences, illustrated throughout with photos, archive material …

Lancashire Life, 6th January 2010
Wainwright is an anecdotal account of its eponymous hero’s life, which offers a rare insight into his impoverished childhood, frosty first marriage, accountancy job and the roots of his love affair with the Lake District.

Online Fellwalking Club, 21st November 2009
For anyone interested in Alfred Wainwright this would be a good addition to the fold and deserves shelf-space in your Lakeland Library.

Telegraph and Argus, 21st November 2009
Beautifully illustrated with stunning photographs… the book draws the reader into the quirky world of a man who became a legend in his own lifetime… Bill presents a personal anecdotal look at the life of the shy, lone walker from Blackburn… It is…

Lancashire Telegraph, 3rd November 2009
A quirky insight into the life of Alfred Wainwright

Lancashire Telegraph, 2nd November 2009
a rare insight into the life of a man – affectionately known as AW – who was notoriously taciturn about his private world… Bill Mitchell has produced a richly anecdotal work which is sure to delight Wainwright fans near and far

The Press (York), 31st October 2009
Illustrated with some stunning colour and black-and -white photographs, this book provides a welcome glimpse of the man behind the legend.