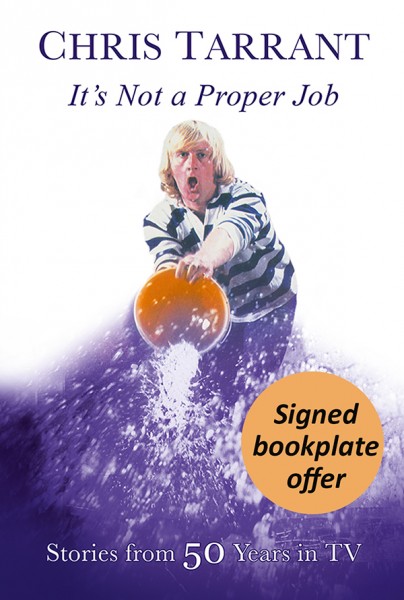 Stories from 50 Years in TV

Chris Tarrant looks back on his legendary 50-year career in television and regales us with extraordinary stories that are both candid and hilarious.

Available with a dedicated bookplate, signed by Chris Tarrant
(example of bookplate)
(Enter the name(s) and dedication(s) in the notes box below ‘Dedications/Gift Messages’ section, at the checkout)

In It’s Not a Proper Job, TV legend Chris Tarrant regales the reader with hilarious and heart-warming stories from his stellar 50-year career in television and radio. With trademark wit and self-mockery, Chris not only recalls his behind-the-scenes capers with fellow celebrities, but also shows us how, as a man of the people, he has relished rubbing shoulders with ordinary folk on his way to becoming one of the nation’s favourite TV faces.

Chris rose to fame at the forefront of trailblazing telly in the 1970s as the host of Tiswas, the anarchic, flan-flinging children’s show that spearheaded a fresh format and a new era for Saturday morning TV, packed with pranks and full of fun, and which remains a benchmark to this day.

For later audiences, Chris will be more familiar as the face of Who Wants to Be a Millionaire? which he presented for sixteen gripping years and which grew into a global phenomenon. Chris remembers the highs of contestants’ life-changing winnings, the lows of loss, the cringing embarrassment of ignorance, and the infamous cheating of the ‘Coughing Major’.

Spanning five decades, Chris’s television credits are the envy of aspirational TV stars, but reading his laugh-out-loud anecdotes reveals a man still amused by life, by the people he meets, and by his own humble assertion that none of his glittering career can, in any way, be called ‘a proper job’.