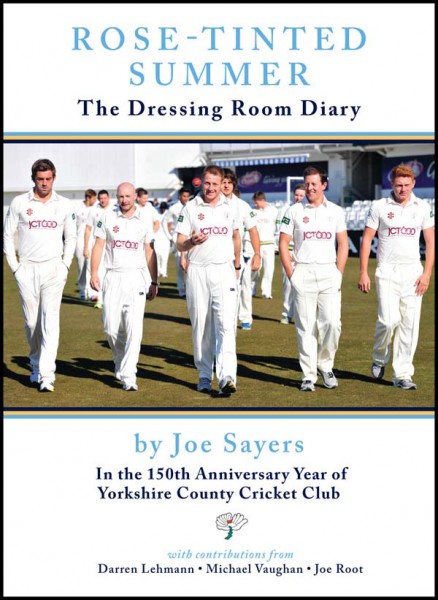 in the 150 Anniversary Year of Yorkshire County Cricket Club

Beautifully produced in hardback with colour images throughout by Yorkshire’s top sports photographers and Joe’s own ‘behind the scenes’ pictures.

Available with a dedicated bookplate, signed by Joe Sayers (what is this?)

In the year marking the Sesquicentennial Anniversary of this world-renowned cricket Club, this book rides the ups and downs of a cricketing summer, providing unrivalled access to the inner sanctum of the Yorkshire dressing room.
Batsman and capped player Joe Sayers tells the story of the White Rose County’s return to the top flight of English domestic cricket and their push for silverware in all forms of the game. Fascinating insight is given into the Club’s foremost characters and the part each plays in defining a cricketing year to remember.
From a wintry January evening at Sheffield’s Crucible Theatre to the season’s swan song at The Oval nine months later, the book reveals the true story behind the headlines of the summer. Key contributions come from former overseas player Darren Lehmann, former England captain Michael Vaughan and rising stars Joe Root and Jonny Bairstow. And whilst Yorkshire’s Championship campaign unfolds, and decades of the County’s golden past are celebrated, the tale of England’s international summer is told through the eyes of the Yorkshiremen graduating to the highest level.
Key issues in the modern game are brought to light and debated. Editor David Warner compares the respective lives of County cricketers at either end of the County Club’s history. And in charting the progress of Yorkshire’s current crop of promising cricketers, Sayers looks into the future of the White Rose Club, noting an exciting potential and the path it may take.
Whilst the world of professional sport takes on an increasingly distasteful air of celebrity, this is a book about honest sporting professionals going about their daily business, with one eye respectfully on the past, and the other gazing firmly into a promising future.