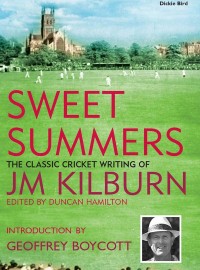 Wisden Cricket Book of the Year 2008

The Classic Cricket Writing of JM Kilburn. Capturing a time when the true spirit of cricket existed. Through Kilburn’s writing, some of the game’s past legends are brought to life.

Capturing a time when the true spirit of cricket existed. Through Kilburn’s writing, some of the game’s past legends are brought to life among them Donald Bradman, Fred Trueman, Jack Hobbs, Keith Miller, Garfield Sobers, Hedley Verity, Len Hutton and Walter Hammond.

For more than forty summers, J M Kilburn, the Yorkshire Post’s cricket writer, captured the spirit and beauty of the game and the legends gracing it, among them Donald Bradman, Fred Trueman, Jack Hobbs, Keith Miller, Garfield Sobers, Hedley Verity and Walter Hammond. He writes of the days when 8,000 people watched Yorkshire’s County Championship matches; when he travelled by ship on an Ashes tour with his friend Len Hutton; and of a bygone but beautiful period when one-day matches, coloured clothing and rampant commercialism in cricket simply didn’t exist. Now you can explore these summer days in a richly satisfying collection of Kilburn’s work gleaned from the Yorkshire Post, Wisden and The Cricketer. Kilburn is worth reading not only because he was a knowledgeable and respected interpreter of cricket – well balanced, tough-minded and scrupulously honest in his verdicts – but also for the valuable historical and social perspective that reading him provides. Most of all he demonstrably cared about cricket. His heart was in it – and belonged to it.

Derek Hodgson, Yorkshire County Cricket Club Yearbook 2009, 2nd September 2009
At a time when even worthy university professors believe that standard English prose and spelling will have to submit to the mongrelese of e-mail and text language, a collection of Kilburn’s work comes as a welcome reminder of the days when writers,sub…

CricInfo, 21st August 2008
Kilburn’s writing evoked Sutcliffe, Hutton and Boycott – sound, hard, correct, rather than flamboyant. Yet, like them he was capable of evoking the occasional gasp of surprise. A collection of his pieces appear in Sweet Summers . . . Thank God for that.

Cricketworld.com, 2nd August 2008
An evocative new book [that] captures a time when the true spirit of cricket existed.

Patrick Collins, Wisden Cricketers’ Almanack, 15th July 2008
those of us who were shamefully unfamiliar with his work are indebted to Duncan Hamilton for compiling and editing Sweet Summers? [Kilburn] wrote with technical awareness, shrewd insight and firm principles. He possessed the eye of a reporter and the s..