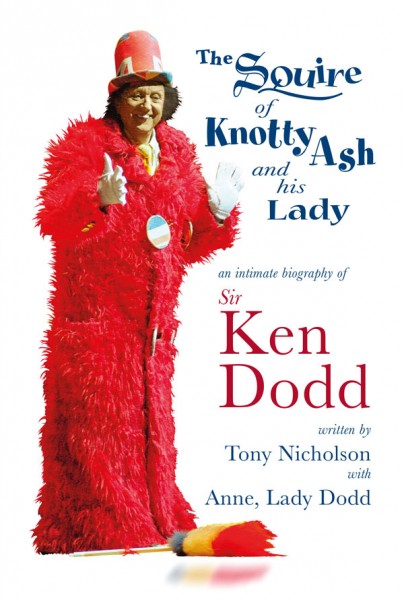 The Squire of Knotty Ash

This book, thanks to Ken’s wife, Lady Dodd,  gives the first ever in-depth account of his astonishing story, and unravels ‘the other Ken Dodd’ – the fascinating, kind and complicated private man with whom she spent her life.

Includes photographic sections, with many images from the Dodd family album

Available with a dedicated bookplate, signed by Lady Anne
(example of bookplate)
(Enter the name(s) and dedication(s) in the notes box below ‘Dedications/Gift Messages’ section, at the checkout)

Sir Ken Dodd was a national institution.  He worked tirelessly as one Britain’s most popular comedians for a staggering seven decades.  His five hour stage shows were legendary, and he was still performing these hilarious theatrical marathons right up to the age of ninety.  Ken was the comedian’s comedian.  Fellow pros idolised him and looked up to him as the guv’nor.

He was also a talented ballad singer, and enjoyed a hugely successful chart-topping career in the 1960s.  In fact his was the only name, apart from The Beatles, to appear in the top five best-selling singles of that iconic pop music decade.

Despite his nationwide fame and his crazy, larger-than-life stage persona, he was actually a very private person, away from the limelight.  A quiet, well-read, deeply religious thinker.  He consciously separated ‘the two Ken Dodds’, as he referred to them, and always declined to cooperate with biographers, in order to keep the private Ken Dodd just that – private.

This book, thanks to Ken’s wife, Lady Dodd,  gives his many fans the first ever in-depth account of his astonishing story, and unravels ‘the other Ken Dodd’ – the fascinating, kind and complicated private man with whom she spent her life.

If you liked Ken Dodd you will love this book.  It will undoubtedly surprise and delight you.

Tony Nicholson started his showbiz career in the 1970s as a comedy scriptwriter, writing jokes for no less than The Two Ronnies.  He then became a television producer, making entertainment programmes for all the major channels, and earning him a highly-prized BAFTA Award.

The two professions sat comfortably side by side throughout his working life – both writer and producer.

Tony has been a lifelong Ken Dodd fan. He has written this affectionate and candid biography with Lady Dodd, not just as a showbusiness insider, who worked with Ken in the 1980s, but also as a genuine fan of Ken’s work.

Tony Nicholson is the author of Shut That Door! – the definitive biography of comedian Larry Grayson.

He has been married for over forty years and has two grownup sons.  Originally from Yorkshire he now lives by the sea on the south coast of England.

Anne, Lady Dodd, née Sybil Anne Jones, had her own showbusiness career, which started before she even met Ken.  In the sixties, she was a dancer with the legendary Bluebell Girls on TV in Rome.  Subsequently this troupe appeared for a Christmas season at The Manchester Opera House, where Ken Dodd was topping the bill.  They met and started a friendship which lasted fifty six years and would blossom into a loving relationship and eventual marriage.

Ken had always intended to write an autobiography, but never got round to it.  As Ken’s most loyal fan, Anne wanted to be part of sharing the definitive Ken Dodd story with his many supporters, and revealing the human side of the comedy superstar who became her husband.